A cooperation agreement between the Football Association and “Dubai Ambulance” 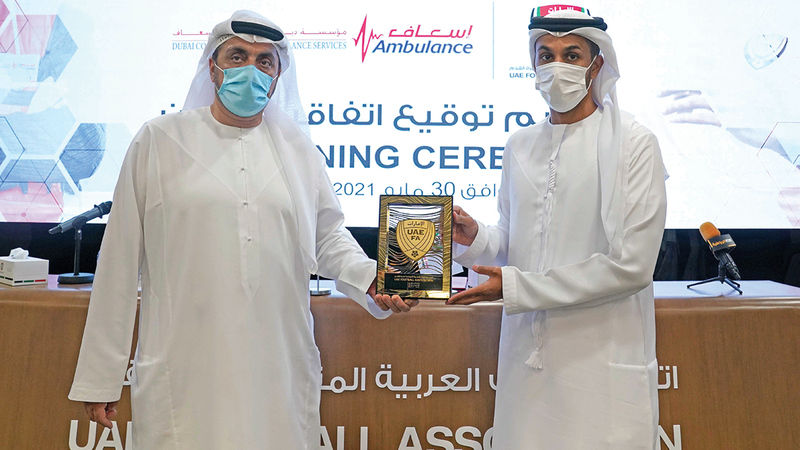 The Football Association signed a cooperation agreement with the Dubai Corporation for Ambulance Services, according to which it becomes a major partner of the Football Association in providing medical services during the Group Seven matches of the joint Asian qualifiers that qualify for the 2022 World Cup and the 2023 AFC Asian Cup, which will be held in the country from The third to the 15th of June 2021.

The announcement of the agreement came during a press conference, held yesterday at the Federation headquarters, in Dubai, in the presence of the Executive Director of the Dubai Corporation for Ambulance Services, Khalifa Al Drai, and the Secretary General of the Football Association, Mohammed bin Hazzam.

Mohammed bin Hazam said that the country’s hosting of the joint qualifiers requires the solidarity of all parties in order to make this important sporting event a success, and to reflect the prosperous image of the country that hosted many different sporting events during the Corona pandemic.

In turn, Khalifa Al-Drai indicated that the agreement translates many years of cooperation between the institution and the sports authorities in the country, stressing that the institution is fully prepared to provide all ambulance services during the tournament, and to apply the highest safety standards followed in the country.

Dubai Corporation for Ambulance Services will provide ambulances in all training fields for the teams and referees, and provide clinics in the hotels where the teams’ missions and the AFC delegation are based.