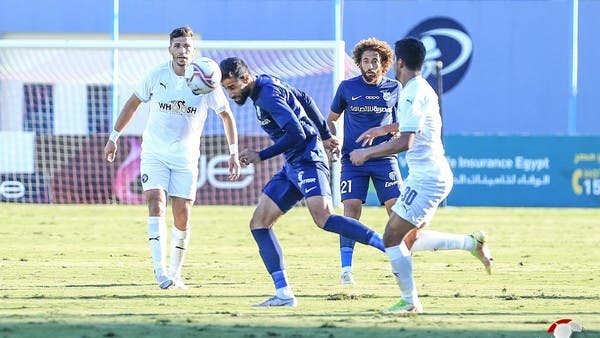 Goalkeeper Sherif Ekramy made a mistake at the start of the second half to prevent his team Pyramids from advancing to the top of the Egyptian Premier League after a 1-1 draw with Enppi on Saturday.

Pyramids advanced through Mahmoud Wadi in the 42nd minute, but his colleague Ekrami gifted Enppi the equalizer four minutes after the break.

Pyramids raised its score to 17 points from seven matches, one point behind leaders Al-Ahly, who plays against Future on Sunday.

Pyramids almost went ahead after eight minutes, but Eric Traore’s shot bounced off the left post.

Ahmed Tawfik crossed from the right, and Traore jumped above everyone else to header just outside the goal.

The Palestinian gave Wadi progress to Pyramids after a cross pass from Traore, to raise his score to five goals this season, equal with four other players at the top of the league’s top scorer.

At the beginning of the second half, Mahmoud Daoud sent a corner kick that fell from the hand of goalkeeper Ikrami, and Ahmed Yahya put it in the goal.

Ramadan Sobhi hit a ball that rebounded from the post 12 minutes before the end, and Mahmoud Gad, Enppi goalkeeper, almost gifted the victory to Pyramids in stoppage time when he went out of his goal to remove a ball, but it reached Ibrahim Adel, who knocked it out of the empty goal.