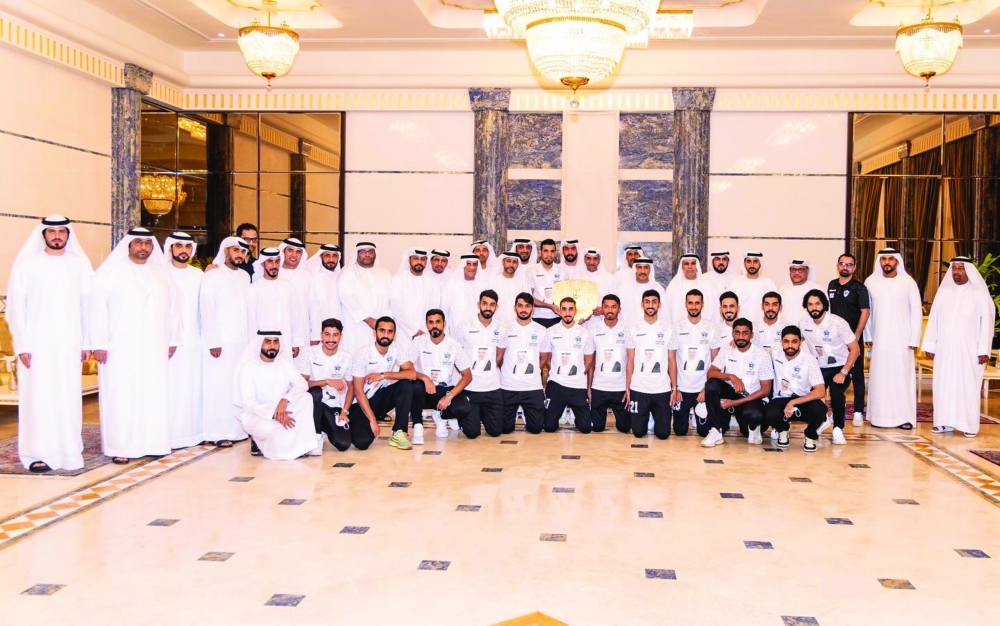 His Highness Sheikh Hamad bin Mohammed Al Sharqi, Member of the Supreme Council and Ruler of Fujairah, stressed the value of sports achievements achieved by clubs in local and international championships, and their role in consolidating the position of the UAE in the sports field, pointing to the need to encourage young people to continue efforts to achieve more honorable results in Sports tournaments held inside and outside the country.

This came during the reception of His Highness the Ruler of Fujairah, at his palace in Rumaila, in the presence of Sheikh Saleh bin Mohammed Al Sharqi, Chairman of the Department of Industry and Economy in Fujairah, and Sheikh Maktoum bin Hamad Al Sharqi, the Dibba Al Fujairah Club team, on the occasion of winning the first division shield for the sports season 2021-2022 and being crowned in the championship. And qualifying for the next season of the ADNOC Pro League.

His Highness, the ruler of Fujairah, blessed the club for achieving this important achievement, praising the level of performance of the club’s technical and administrative team members during the tournament, calling on them to adhere to sports ethics, continue efforts, continue to develop the individual skills of the players, and ensure commitment to serious training to achieve the best results in the season. The next athlete, which contributes to enhancing the reputation of the club and its participation in sports competitions.

His Highness ordered the Dibba Sports Club to be given an amount of 4 million dirhams for obtaining the championship.

The Chairman of the Board of Directors of Dibba Al Fujairah Club, Ahmed Al Dhanhani, thanked His Highness the Ruler of Fujairah for this meeting. He also thanked His Highness for the generous donation of constructing Dibba Al Fujairah Club at a cost of 100 million dirhams, which has a capacity of 10,000 spectators, and is in line with the requirements of the AFC. The International Football Association “FIFA”, stressing that His Highness’ great support for the club is a key factor in its success and the continuation of its achievements in the coming stages.

In turn, the members of the club’s administrative apparatus and the players thanked and appreciated His Highness, the ruler of Fujairah, for the reception, his support for the athletes and their constant encouragement, which contributes to the development of the club and the strengthening of the presence of the Emirate of Fujairah in the sports field.

The meeting was attended by Director of the Emiri Court in Fujairah, Mohammed Al-Dhanhani.