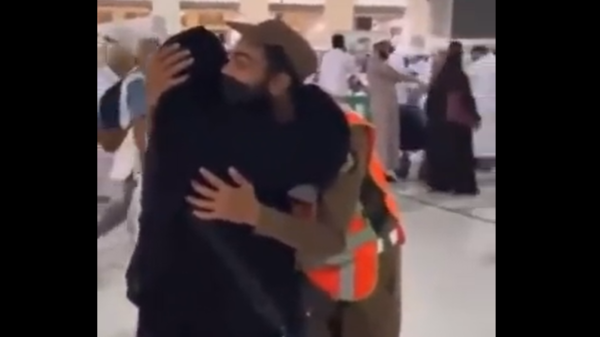 In a human moment to meet a mother and her son in the Great Mosque of Mecca, social media activists sympathized with a clip of a moment when a security man met his mother, who surprised him by her presence next to him.

The video showed moments filled with the feelings of a mother’s love for her son, amid the interaction of social media pioneers with the security men who work on the campus and who set the most wonderful examples of humanity and interaction with society.

Social media has uploaded many clips and pictures that express the dedication of the security men to serve the visitors of the House of God in the two Holy Mosques.

Maintaining security inside the Grand Mosque and its courtyards, and following up on security cases.

Organizing daily entry and exit to and from the Holy Mosque.

And making sure that the walkers and paths designated for pedestrians are free from sitting or lying down.
Providing humanitarian actions such as guiding and assisting the elderly, the infirm, the sick and others.

And the organization of the movement of pilgrims in the congestion sites.

And guarding the imam from his entry until his exit, accompanied by the receiving officer, the security commander of the Grand Mosque, and the guard of the pulpit, who guards the imam during the sermon.