A massive demonstration in Brussels, rejecting the closure of performance halls due to Corona 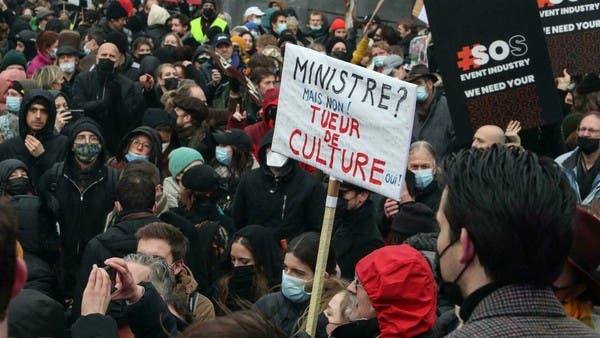 Thousands demonstrated in Brussels, on Sunday, against the authorities’ decision to close performance halls to stop the spread of the mutant Omicron.

Demonstrators carried placards reading “No to this stupid procedure!” and “Apart from finances, culture enriches us” and “No culture, no future.” Some protesters put up carnival masks in an atmosphere that gathered French and Dutch speakers.

Police estimated the number of demonstrators at five thousand.

The gathering lasted near Koningsplein Square in the Museum District in the Belgian capital for about two hours under heavy rain, and the demonstrators dispersed without incident on Sunday afternoon, according to an AFP correspondent.

Officials at major cultural institutions in Brussels called on politicians to “reconsider” the decision to close theaters from Sunday. This measure was taken Wednesday as a precaution to combat the spread of the highly contagious mutant Omicron.

But the fourth wave of the Pandemic continues to recede in Belgium, and the number of infections has been declining for three weeks, and experts who give advice to the government on the health level did not recommend officials to tighten measures in the cultural sector despite the dire situation in hospitals.

And speaking of a “contradiction” or even an “anomaly”, many health experts publicly denounced this decision and considered it surprising, especially with allowing cafes and restaurants all over the country to continue to operate within certain restrictions.

Officials in prominent theaters spoke of the importance of keeping cinemas and theaters open “for the mental health” of the population exhausted by the Pandemic nearly two years ago.

“I’d rather eat culture than eat in a restaurant. This closure is unfair,” Catherine, a French language teacher in her fifties, told AFP.

And some theaters and many cinemas, especially in Brussels, Namur (central) and Liege (east), decided to defy the ban by keeping their doors open on Sunday.

Also, another protest was held in Liege on Sunday, with hundreds of people participating, according to the Belga news agency.

In announcing the new restrictions on Wednesday, the government said it did not intend to reassess the situation until early January.

For its part, the Belgian League for Human Rights expressed its rejection of this measure on the grounds that the entertainment world “greatly respected the imposed protocols.” And announced its intention to take legal action with associations and unions in the sector.