A mud palace has been standing tall for 250 years.. south of Riyadh 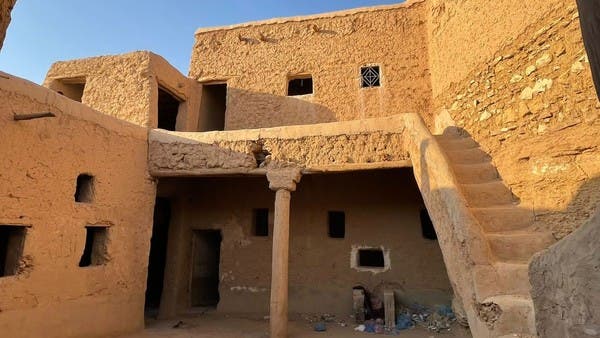 The historic palaces and houses of the Hanish family, located in the old Al-Ray’ neighborhood in the south of Al-Sulail governorate in the Riyadh region, were distinguished by a unique architectural character, and embodied the beauty of the urban heritage in a grandiose Najdi style.

The ancient mud buildings, which embraced the fragrance of the past and the smell of ancestors, to spread between their walls an authentic heritage that tells the authenticity of their residence, this was a motive for the photographer and interested in heritage and tourism sites, Abdul Ilah Al-Faris, to take a package of pictures that embodied the beauty of the place.

He explained to “Al Arabiya.net”, “I was keen to document these sites and convey these scenes to the world. The heritage mud palaces and buildings of the Hanish family represent an ideal model for the heritage houses that prevailed in the past in central Saudi Arabia, where the history of its establishment in its current form dates back to more than over 250 years.

The Al Hanish buildings are among the most prominent heritage monuments in the region, and they are still preserving their urban heritage. Therefore, these palaces are distinguished by a unique heritage and fragrance, in addition to the hospitable nature of their people. They are replete with many ancient historical monuments and palaces, which indicate the ancient and ancient heritage of this cultural heritage. Perhaps what distinguishes it is the presence of diversity in its heritage and many of the monuments and architectural elements that still retain their details, style and architectural elements, as there is hardly a landmark in the place without a trace of heritage on one of its sides.

The site is full of many palaces, historical buildings and old residential buildings. The palaces and buildings embroidered wonderful types of decorations for windows and doors, as they contain a lot of intersecting lines, squares, circles and triangles, in addition to the use of some leaves and flowers, as well as bunches of grapes and palm fronds, and these decorations tend To shorten the details and abandon the complications.

The heritage decorations engraved on the wooden doors refer to one of the forms of architectural identity that reflects the environmental and social characteristics and features of the community. The buildings also took a distinctive architectural character that fits with the time period and its capabilities and ingredients. The houses were built of mud that was strengthened using straws, As well as roofing trunks of tamarisk and palm fronds.

Al-Fares photographer confirmed that the ancient mud palaces in the region have become one of the attractive tourist stations in the region, and “a prominent landmark for the tourist to learn about the art of ancient construction and the unique urban engineering in the construction of mud houses spread in our beloved kingdom, and a rare diversity in the shape of neighborhoods for each region”, where Saudi Arabia is famous It embraces ancient historical palaces and buildings that are still tall, which preserved its beauty.

He concluded his speech: “The concerned authorities in our dear country are making great efforts towards the historical villages, archaeological sites and ancient fortresses, to preserve them, as they are a civilizational and cultural sign that has accumulated over hundreds of years, and the rich and varied human experiences it contains.”