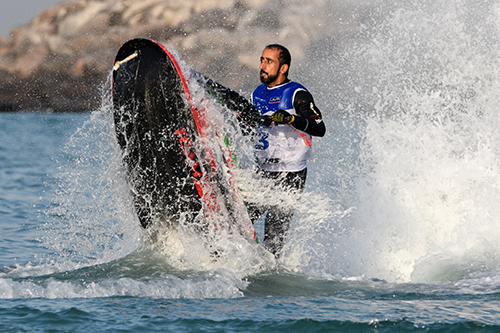 Rashid Al Mulla, the star of the Abu Dhabi Marine Sports Team, won the exhibition movement category, with the title of the final round of the World Aquabike Championship, which was hosted by the Italian city of Olbia on the island of Sardina.

Al Mulla reached the full mark in the closing round, raising his score to 100 points, announcing his victory in the World Cup gold in this category, to guide Emirati sports a new achievement in marine sports.

Al Mulla retained the title for the fifth consecutive season for the Abu Dhabi team in the show movement category, after he performed the best in the closing round, and reached the highest score of points with the jury.

For his part, Salem Al Rumaithi, Director General of the Abu Dhabi Marine Sports Club, congratulated the hero Rashid Al Mulla for his achievement and remarkable brilliance at the expense of all participants in this category.

He stressed that Al Mulla’s achievement continues the club’s series of excellence in various marine sports, the most recent of which was the Abu Dhabi team winning first place and the gold medal for the Formula 2 powerboat category.

And he said, just one day after Mansour Al Mansouri won the world gold in the Formula 2 competitions, our joy was also complete, with Rashid Al Mulla winning the gold for the exhibition movements and the continued leadership of our team in the most prominent international marine championships.

Al Rumaithi added that the victory of the Abu Dhabi team is a victory for Emirati sports, and it reflects the continuous interest and support of the wise leadership of the marine sports sector, which has become full of champions, international stars and talented technical cadres from the people of the country.