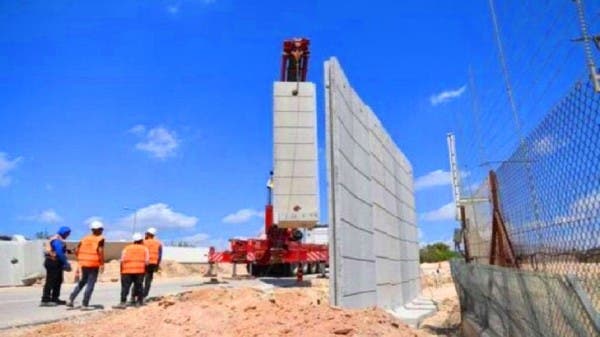 Israel has started building a security wall, 45 kilometers long and 9 meters high, in the northern West Bank, according to a statement issued today by the Israeli Ministry of Security, in which “the huge concrete wall contains protection equipment and other technological means, to prevent infiltrations, and will replace the security fence that was built.” It was built 20 years ago near the village of Salem in the northern West Bank, and ends in the Beit Hefer area.

And Israeli Security Minister Benny Gantz said yesterday, “We continue to strengthen the protection of the north by strengthening the security barrier and providing a solution to the Israeli home front as an integral part of our operational activities, at the same time we will continue to work to confront any threat in order to provide security for the citizens of Israel.” According to him, the wall is being coordinated by the Engineering and Construction Department of the Defense Ministry and the IDF Central Command.

As for the head of the Border Directorate at the Israeli Defense Ministry, Eran Ophir, also said yesterday, “The work will continue for about a year, and that any closed part of the wall will tightly prevent entry into Israel (…) and we will continue to close the loopholes along the seam line.” He said.

In June 2002, Israel built a wall on West Bank lands, most of it is concrete, and some of it consists of fences and barbed wire, with the pretext of preventing Palestinians from infiltrating, in a move condemned by the Palestinian Authority and the United Nations.