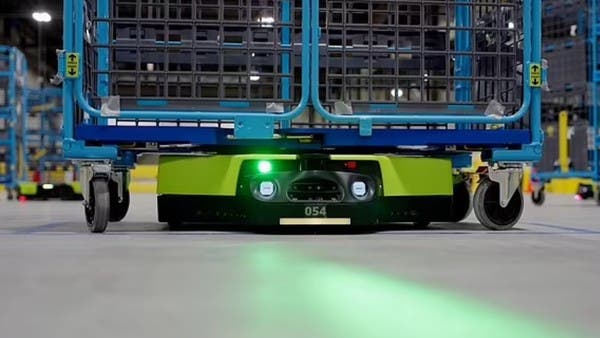 The giant “Amazon” company has created a new robot that is expected to make an additional leap in its operations, despite it being not the first in the company’s fleet and warehouses, but it has unprecedented and great capabilities that its peers do not have in the company.

The new robot, called “Brutus”, is “the world’s first autonomous robot”, as the company described it, and will join its army of workers to help load and unload goods, transport goods and manage logistics within its large warehouses.

A report published by the British newspaper “Daily Mail”, and seen by “Al Arabiya Net”, stated that “Proteas” was designed to transport large wagons full of packages around the floor of the warehouse, but while ordinary special robots have to work in a confined area away from human workers, Amazon says Brutus will be able to roam freely in the warehouse and among the human workers because he can sense those around him and feel them, thus avoiding them and not colliding with them or harming them.

The new robot “Proteas” uses Amazon’s technology for safety, perception and navigation to move independently and avoid collisions with human workers, according to the “Daily Mail”.

“Historically, it has been difficult to integrate bots securely into the same physical space that people use,” the company said. “We believe Proteus will change that while maintaining intelligence, security, and collaboration.”

The new robot “Proteas” appeared in a video clip, where it can be seen sliding under one of the “Amazon” carts, which are the non-motorized carts used to transport packages through the company’s warehouses.

A panel in the center of the robot lifts up, lifting the cart a few inches off the ground. Brutus then begins his autonomous journey through the warehouse, using technology similar to that used in self-driving cars to navigate lanes and avoid obstacles.

The robot emits a green beam in front of it as it moves and stops if a human operator steps in front of the beam. When the robot reaches its destination, the center plate falls down and the robot slides out and moves to the next cart.

“The robot is designed to be automatically directed to do its job and move between employees, which means it doesn’t have to be confined to specific areas,” Amazon said.

Proteus can operate in a way that promotes simple and secure interaction between technology and people, opening up a wider range of potential uses for employee assistance.

The company said Amazon’s vision is to automate the processing of GoCart across the network, reducing the need for people to manually move heavy items and instead allowing them to focus on more important work.