A painful blow to Liverpool, after confirming the long absence of his defender, Van Dyck 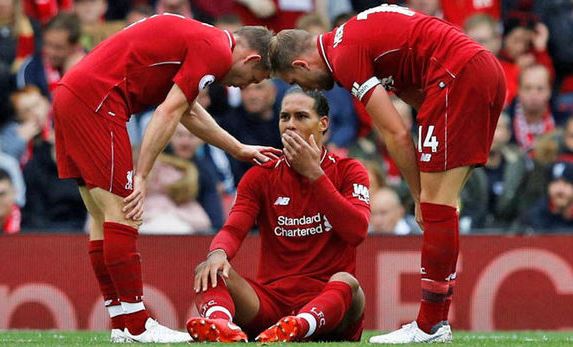 Dutchman Virgil van Dijk, Liverpool’s English defender, will be absent for “more than a month” due to a hamstring injury, German coach Jurgen Klopp announced on Friday. Liverpool are 16 points behind Premier League leaders Arsenal, and seven points behind fourth.

Van Dyck was injured during the 3-1 loss against host Brentford, Monday, in the league, and he left at halftime. He is expected to miss the “Premier League” matches against Brighton, Chelsea, and Wolverhampton.

The Dutchman faces a race against time to be ready for the Merseyside derby against Everton on February 13 and the first leg of the Champions League round of 16 at home to Real Madrid the following week. Klopp said on the sidelines of the match against Wolverhampton in the third round of the England Cup on Saturday, “It is a surprise and a big blow for us. The diagnosis was harsh, we are talking about weeks, more than a month, but I hope he (recovers) quickly. It happened now.”

In another context, striker Kodi Khakpo, a citizen of Van Dyck, whose registration was completed this week following his transfer from PSV Eindhoven after his strong performances in the Qatar World Cup, may play his first match with the team on Saturday.

Klopp said in this regard, “I am very optimistic about him. Kody will get the same amount of time as every player. You have to adapt offensively, it is not that easy. He comes from a different league. It is always difficult.” He added, “Of course, with our situation and the strikers’ injuries as well, it’s really good to have a player who is very capable in a lot of things in the attacking part and knows where to target.”