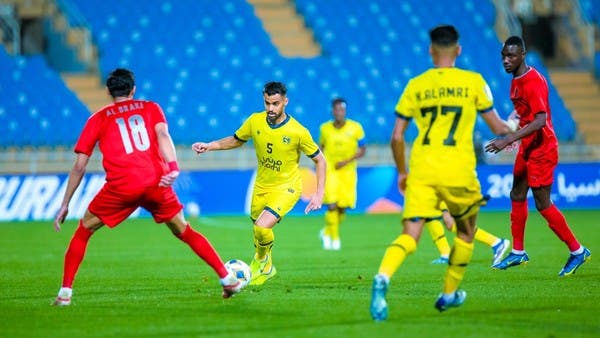 Al Shabab are looking for a point against Mumbai City on Thursday at Prince Faisal bin Fahd Stadium in Riyadh to ensure their qualification to the round of 16 and the top of their group in the AFC Champions League in football, while several other clubs have the opportunity to decide their ticket.

The five group champions, along with the best three second-placed clubs, qualify for the round of 16 of the Western Region.

Al-Shabab leads the second group with ten points, two rounds before the end of the competitions, six points behind each of the Emirati Al-Jazira, Mumbai and the Iraqi Air Force.

Despite the rotation policy that Romanian coach Marius Somodica relied on since the beginning of the tournament for fear of overburdening his players, the capital’s team presented remarkable levels.

The capital’s whites have distinguished names, led by Banega, the Brazilian Carlos Junior, Fawaz Al-Qarni and Turki Al-Ammar. On the other hand, Mumbai showed good levels due to its limited capabilities, and scored some remarkable results, such as a 2-1 victory over Al-Jawiya.

The coach said in the press conference before the match: We have to focus, and play with a high spirit to achieve the three points, in football, winning brings the other.

The Al-Quwa Al-Jawiya and Al-Jazira match will be important for the two teams to compete for the second place. While the first leg ended 2-1 in favor of the first, Al Jazira sought revenge and overcame its disappointing negative draw against Mumbai in the last round.

Dutch coach Marcel Kaiser called on his players to be more effective in front of the opponents’ goal: We must work to address the problem of scoring goals, as we do not reach the net as we usually do during the local league matches, in all the previous matches we created many opportunities, but we were missing to finish .

In turn, Ali Wahib, assistant coach of Al Jawiya, said after the heavy loss to Al Shabab: We will shift our focus to the last two matches, especially after Al Jazira’s draw with Mumbai, where the competition is fierce for the second place in the group.

Al-Taawoun is looking to regain the fourth lead from Al-Duhail Qatar when it faces it Friday at King Abdullah Sports City Stadium in Buraidah, in a strong battle over the direct qualification ticket that Al-Duhail will guarantee if it wins.

The first leg ended with Al-Taawoun winning 2-1, scored by Cameroonian Leander Tawamba and Spaniard Alvaro Medran. This is the fourth meeting between them in the Champions League, after Al-Taawoun won the previous three matches.

Al-Duhail leads with nine points, compared to 7 for Al-Taawon, and 4 for the Iranian Sepahan, who meets the last Uzbek Pakhtakor (3).

His Argentine coach, Hernan Crespo, said after the victory over Pakhtakor: “We worked to correct the mistakes that were occurring in previous matches, which helped us play well and score three great goals, and I think it is not easy to achieve this, especially in such a strong tournament.”