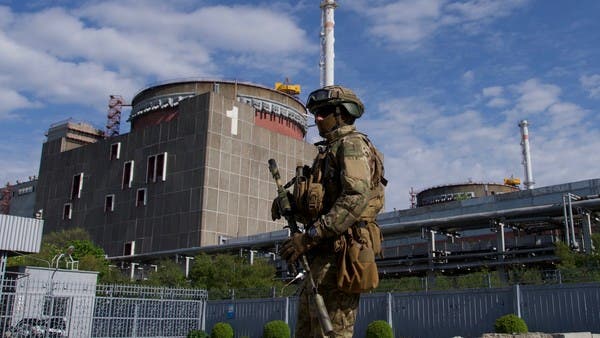 The Russian army organized a press tour on Sunday at the Zaporizhia nuclear power plant, the largest in Ukraine and Europe, whose seizure by the Russian army raised the international community’s concern.

A charred office building appeared at the site, but the reactors’ buildings were intact, according to Agence France-Presse.

In early March, Russian forces took control of this station located in the city of Energodar in southern Ukraine. The clashes that took place there raised the international community’s fears of a nuclear catastrophe similar to the one that occurred in 1986 in Chernobyl.

AFP was able to monitor the damage during a press tour organized by the Russian army. The facade of a large office building that was used as a training center for the station’s workers was charred from the fire, with many windows smashed.

However, there was no sign of fire or shelling on the six cubes that are topped with red domes and contain the reactors whose construction began in the eighties of the last century.

Last week, the International Atomic Energy Agency considered the situation “alarming” at the Zaporizhia station, whose experts have not been able to reach it since Moscow took control of it.

However, Major-General Valery Vasiliev, a specialist in nuclear and chemical issues, who was hastily dispatched by Moscow to secure the site, asserts that the plant is “operating normally, in accordance with nuclear, radiological and environmental standards.”

None of the few soldiers who guarded from behind piles of sandbags wore radiation protection equipment or masks.

“Everything is fine here!” said Andrey Shevchik, the new mayor of the pro-Moscow mayor of Energodar. “We are ready to sell electricity to Europe. We welcome any buyer. It’s very cheap!” he added, before leaving in an SUV covered with Russian flags.

However, there is still a great deal of uncertainty surrounding the operation of the station, which is still provided by Ukrainian teams.