A Russian enclave surrounded by NATO .. ​​”Kaliningrad” is the potential arena of World War III 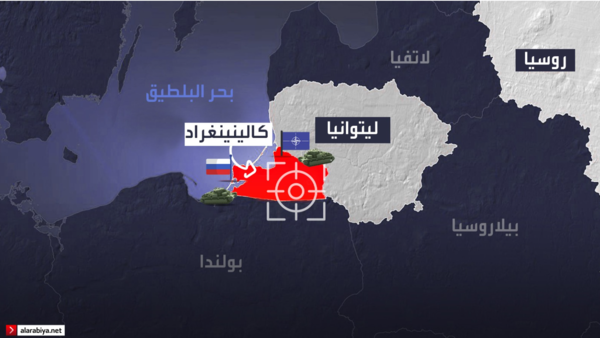 The Baltic enclave of Kaliningrad, thousands of kilometers from Moscow, has become at the center of a Russia-European conflict as a result of European Union sanctions against Russia since the start of its invasion of Ukraine.

The Kaliningrad enclave lies between Poland and Lithuania, a Russian military position in Europe and an important strategic location. But it is also isolated in an anti-Russian region surrounded by two members of both NATO and the European Union that firmly support Ukraine in the face of Russian objectives.

From Germany to Russia

Kaliningrad has not always been Russian. Founded in 1255 during the German expansion into Slavic lands, this region was initially called Königsberg.

It was occupied by the Soviet Union in April 1945 after intense fighting with the Nazis.

The enclave, which has an area of ​​just over two hundred square kilometers, includes about a million people, about half of whom live in the city of Kaliningrad, which is the administrative capital of the enclave of the same name.

Since the 19th century, the region has been an economic center of the German and Russian worlds. Since 1996, the Kaliningrad enclave has been considered a special economic zone.

The enclave particularly benefits from its two ice-free ports – Kaliningrad and Baltiysk – and its own road and rail networks to trade with its neighbours.

However, Lithuania imposed restrictions in mid-June on the transit of freight trains transporting from Russia to Kaliningrad goods subject to European sanctions, including minerals, cement, alcohol and fertilizers, knowing that this list will be expanded later to include coal and oil.

Kaliningrad Governor Anton Alikhanov estimated that between 40 and 50 percent of the enclave’s supply through Lithuania could be affected by European sanctions.

The region has important military traditions, serving as a stronghold during the two world wars and a defensive fortress during the Cold War.

In the face of NATO expansion, Moscow reinforced its military presence in Kaliningrad and organized important maneuvers there.

In recent years, Moscow has installed nuclear-capable missiles and S-400 air defense systems in the pocket.

And in February 2022, Russia deployed hypersonic missiles in the pocket, just before its forces began the invasion of Ukraine.

Also in Kaliningrad is the headquarters of the Russian Baltic Fleet.