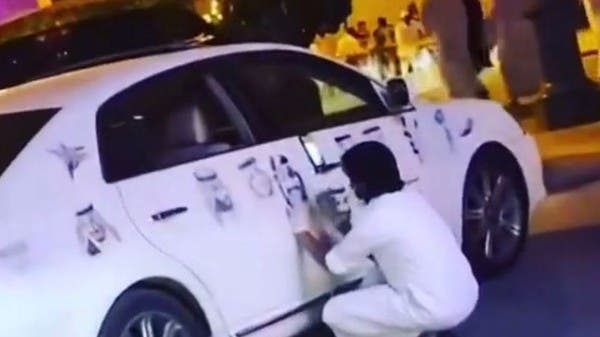 Artist Maher Al-Mutairi was called the soldier painter, after he was injured in the southern border, and he launched into the world of plastic art, and became the painter accredited at the Saudi Consulate in Dubai. At the same time, he is fighting cancer.

He is from an artistic family whose talent was launched to record excellence by drawing on things, and he considers drawing a safe haven from the noise of people and life.

In his interview with Al Arabiya.net, he said that he learned art from a young age, received painting at school, and recently participated in many exhibitions affiliated with the Ministry of Culture and King Saud University, and received many awards.

He continued, “The award may affect the performance of some artists, because the artist is very sensitive by nature, but it is important for the artist to practice his work with love without being affected by materialism.”

He pointed out that he practiced drawing in all places, and on many things and materials, and mastered drawing on cars and glass.

He added that he draws the characters he loves, and that his daughter also has a talent for drawing, and they call her the little painter.

After he chose to draw the character of Sheikh Hassan bin Wata Al-Arjani, a statesman, the painting was admired by many officials and princes, indicating that he has the queen of drawing on the description or through one look at the picture, and therefore he was approved to do the drawing for the Saudi Consulate in Dubai.

He added that he found great support and the participation of his work in government centers such as the Ministry of Health, Civil Defense and some police departments. He was also supported by many beloved personalities such as Prince Abdul Rahman bin Musaed, Prince Faisal bin Turki, Sheikh Turki Al-Haqbani, Sheikh Salama bin Mallhi, Sheikh Hassan bin Waqta and his son Sheikh Ahmed bin his time.

And about his injury in the southern border, he revealed that he received a shot in the abdomen, and was admitted to the hospital for the operation, and the presence of bowel cancer was discovered, and he began a treatment journey.

Regarding his professionalism in art, he stated that he was receiving treatment for cancer at King Faisal Specialist Hospital and had a great time of spare time, and he used it in drawing with the support of Princess Doaa bint Muhammad, who pushed his artistic talent by directing him to art centers for training and practicing painting on glass and on cars.

While in the hospital, he drew a nurse on the glass, and the image appeared impressively, using primitive pens or liquid inks. He also painted the hospital glass, and enhanced his talent, enabling him to draw people within 25 minutes.

He concluded his speech by saying that he was able to put his own mark in the world of art by turning his afflictions into a starting point for art and presenting his own message through artistic creativity.