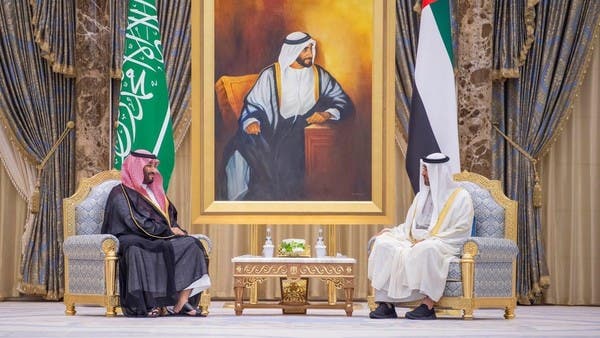 Today, Wednesday, the Kingdom of Saudi Arabia and the United Arab Emirates issued a joint statement at the conclusion of the visit of Prince Mohammed bin Salman bin Abdulaziz, Crown Prince, Deputy Prime Minister and Saudi Minister of Defense to the Emirates.

The statement stated: “Within the framework of the distinguished brotherly relations and the deep-rooted historical ties that unite the leaderships of the Kingdom of Saudi Arabia and the United Arab Emirates and their two brotherly peoples, and in an effort to strengthen and develop strategic cooperation and economic, commercial and development integration, towards building a better future that achieves security, prosperity, comprehensive development and the aspirations of the peoples of the two brotherly countries, and based on On the directives of the Custodian of the Two Holy Mosques King Salman bin Abdulaziz Al Saud – may God protect him – His Royal Highness Prince Muhammad bin Salman bin Abdulaziz Al Saud, Crown Prince, Deputy Prime Minister and Minister of Defense of the Kingdom of Saudi Arabia, visited the UAE on Tuesday and Wednesday on 3 – 4 / 5 / 1443 AH corresponding to 7-8 / 12 / 2021 AD.

The statement added: “During the visit, a session of talks was held between His Royal Highness Prince Mohammed bin Salman bin Abdulaziz Al Saud and his brother, His Highness Sheikh Mohammed bin Zayed Al Nahyan, Crown Prince of Abu Dhabi and Deputy Supreme Commander of the Armed Forces, during which His Royal Highness Prince Mohammed bin Salman bin Abdulaziz congratulated The leadership, government and people of the UAE on the occasion of the fiftieth anniversary of the union, praising the civilized achievements of the UAE in various fields, wishing the UAE further progress, prosperity, prosperity, security and stability under its wise leadership. During the visit, aspects of the brotherly relations between the two brotherly countries and achievements were reviewed. The achieved and ongoing strategic cooperation and joint integration between them, as well as ways to strengthen and develop their relations and move them to broader horizons in various fields.

The two sides praised “the distinguished level of cooperation between them in the political, security, military, economic and development fields, and the cooperation and integration achieved under the umbrella of the Saudi-Emirati Coordination Council, which was established under the kind directives of the Custodian of the Two Holy Mosques King Salman bin Abdulaziz Al Saud, King of the Kingdom of Saudi Arabia, and his brother, His Highness Sheikh Khalifa bin Zayed Al Nahyan, President of the United Arab Emirates – may God protect them – affirming their determination to strengthen and develop the role of the Council in the next phase in all fields, in a way that serves its strategic interests and embodies the wise vision of the leaderships of the two countries aimed at strengthening the bonds of brotherhood, cooperation and partnership between the two brotherly peoples.

The two sides referred to the abundant economic potentials and distinguished opportunities for strengthening the strategic partnership and doubling joint investments, stressing the importance of highlighting the promising areas for investors in the two countries.

In the field of energy, the two sides commended “the close cooperation between them, and the successful efforts of the countries of the OPEC Plus group, aimed at strengthening the stability of the global oil market. They also stressed the importance of continuing this cooperation and the need for all participating countries to adhere to the OPEC Plus agreement. They also stressed the importance of studying cooperation in Joint opportunities in the oil, gas and petrochemical sector, as well as cooperation in the fields of peaceful uses of nuclear energy, strengthening cooperation in the trade of petroleum products, benefiting from electrical interconnection and commercial exchange of electric energy, artificial intelligence, digital transformation, cybersecurity, industry and advanced technology.

In the field of climate change, the two parties welcomed “the strengthening of the existing cooperation on the implementation of the circular carbon economy approach launched by the Kingdom during its presidency of the Group of Twenty and approved by the group as an integrated and comprehensive framework to address the challenges arising from greenhouse gas emissions and their management through available and innovative technologies, as An approach that represents an economically sustainable way to manage emissions.The UAE side noted the comprehensiveness of the local, regional and global gains of the Green Middle East initiative launched by His Royal Highness Prince Mohammed bin Salman bin Abdulaziz Al Saud to confront the phenomenon of climate change.The leading role played by the United Arab Emirates in Climate action, the most important of which is hosting the Conference of the Parties to the Framework Convention on Climate Change COP28 in 2023, which works to intensify international efforts to deal with the repercussions of climate change, and to manage them through the latest technologies used in carbon separation, reuse, recycling and geological storage and through natural media to absorb it within ecosystems “.

They also stressed “the strengthening of cooperation in various fields, such as health, tourism, food security and human development, especially in the youth and women’s empowerment sectors.”

Prince Mohammed bin Salman congratulated the UAE for its successful hosting of Expo 2020 Dubai, and for his part, Sheikh Mohammed bin Zayed Al Nahyan affirmed the UAE’s support for the Kingdom of Saudi Arabia in hosting Expo 2030.

The two sides emphasized “the contents of the Al-Ula Declaration issued on January 5, 2021 AD, which stipulated the full and accurate implementation of the vision of the Custodian of the Two Holy Mosques King Salman bin Abdulaziz Al Saud, which was approved by the Supreme Council at its 36th session in December 2015 AD according to a specific timetable and careful follow-up, including: This is to complete the elements of economic unity and the joint defense and security systems, and to coordinate positions in a way that enhances the solidarity and stability of the Gulf Cooperation Council countries and enhances their regional role through unifying political positions, developing political partnerships with the international community, regional and international organizations, strength and cohesion of the GCC states and unity among its members.

The two sides also reviewed developments and issues of concern to the two countries on the regional and international arenas, and stressed the coordination of their positions to serve their interests and support and enhance security and stability in the region and the world.

In this regard, the two sides affirm their “full support for all the legitimate rights of the Palestinian people, foremost of which is their right to establish an independent and sovereign Palestinian state on the borders of June 4, 1967, with East Jerusalem as its capital, in accordance with the Arab Peace Initiative, the relevant Security Council resolutions, and the terms of reference of the Madrid Conference.” and other agreed international references, in a manner that achieves the aspirations of the brotherly Palestinian people.

On the Yemeni issue, the two sides affirmed “the congruence of their views on continuing their efforts to find a comprehensive political solution to the Yemeni crisis in accordance with the terms of reference represented in the Gulf initiative and its executive mechanism, the outcomes of the comprehensive National Dialogue Conference, Security Council resolution 2216, and the initiative of the Kingdom of Saudi Arabia to end the Yemeni crisis in a manner that preserves Yemen.” The brother’s unity and safety, respect for his sovereignty and independence, and rejection of any interference in his internal affairs,” they also stressed “the need to complete the implementation of the Riyadh Agreement. They condemned the continued targeting of airports, objects and vital facilities in the Kingdom by the Houthi terrorist militia.”

On the Lebanese issue, the two sides stress the “necessity of carrying out comprehensive political and economic reforms to ensure that Lebanon overcomes its crises, confines arms to legitimate state institutions, and that Lebanon not be a launching pad for any terrorist acts and an incubator for organizations and groups that target the security and stability of the region, such as the terrorist Hezbollah, and a source of the drug scourge that threatens the safety of the country.” communities in the region and the world.

The two sides welcomed “the success of the electoral process in Iraq,” and expressed “their wishes for the formation of an Iraqi government that will continue to work for the security, stability and development of Iraq, the elimination of terrorism, and the cessation of foreign interference in its internal affairs.”

The two sides also welcomed “the understandings reached by the parties to the transitional phase in Sudan, and affirmed their continued support for everything that would achieve security and stability in Sudan, and their wishes for Sudan and its brotherly people for stability and prosperity.”

They also stressed “the importance of dealing seriously and effectively with Iran’s nuclear and missile file with all its components and repercussions in a way that contributes to achieving regional and international security and stability, emphasizing the principles of good neighborliness and respect for UN resolutions and international legitimacy, and sparing the region from all destabilizing activities and interventions.” The parties concerned take into account the interests, security and stability of the countries of the region.

The two sides also affirmed that “a political solution is the only solution to the Syrian crisis,” stressing that they “support, in this regard, the efforts of the United Nations and its Special Envoy to implement relevant international resolutions, foremost of which is Security Council Resolution No. 2254, and to stop regional interventions and projects that threaten Syria’s unity, sovereignty, and integrity.” its lands. They affirmed their “stand by the Syrian people and the need to support the international humanitarian community in Syria.”

With regard to Afghanistan, the two sides stressed the “necessity to support security and stability in Afghanistan and not allow the existence of safe havens for terrorists and extremists in it.” . In this regard, the UAE side appreciated the Kingdom’s invitation to an extraordinary ministerial meeting of the Organization of Islamic Cooperation countries to discuss the situation in Afghanistan, which will be held in the Republic of Pakistan on December 19, 2021 AD. The Saudi side also praised the efforts of the UAE in the evacuation operations from Afghanistan.

On the Libyan issue, the two sides “welcomed the Libyan and UN efforts to support the implementation of the agreed political entitlement,” and called “to enable the brotherly Libyan people to achieve their aspirations for unity, peace and stability.” They also stressed the need to withdraw mercenaries, foreign fighters and foreign forces from Libya.

At the conclusion of the visit, Prince Mohammed bin Salman expressed his “thanks and appreciation to his brother, His Highness Sheikh Mohamed bin Zayed Al Nahyan, Crown Prince of Abu Dhabi and Deputy Supreme Commander of the Armed Forces, for the warm reception and hospitality he received and the accompanying delegation.”