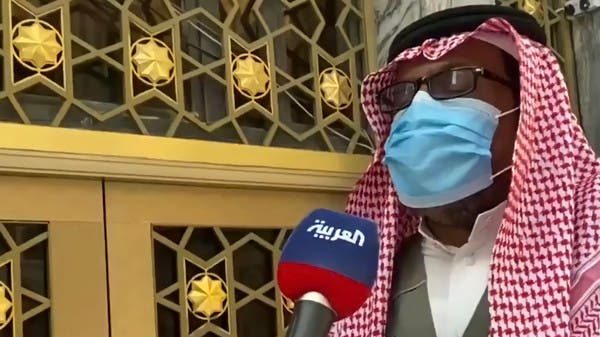 
“22 years I have been working at the gate of the Grand Mosque in Mecca, and it is an honor for me to be a servant of the House of God.” With this phrase, a Saudi spoke at the front of King Fahd’s gate in the Haram to tell his story.

Hassan Hanbok said in his speech to Al Arabiya: Serving the pilgrims and delegations that come from all over the world is a source of pride and pride when answering the queries of pilgrims and guiding them. In accordance with the precautionary measures followed, I commend the great role played by our blessed state for the Two Holy Mosques and their pilgrims.

He added: “Our job is to self-inspect the bags and contents that the pilgrim or visitor enters, and to prevent food and sharp instruments, in addition to guidance when we encounter any inquiries from visitors to the House of God, and when the hours pass during our work, we do not face any difficulties and do not feel tired, regardless of pressure or Overcrowding, all of which makes it easier for serving the pilgrims.

Serving pilgrims and Umrah pilgrims at the gates of the Haram

It is noteworthy that the Department of Doors at the Grand Mosque made an early plan to receive the pilgrims’ guests amid a system of services in accordance with precautionary measures, preventive measures, and health requirements, while the number of employees participating in this exceptional season exceeded more than 100 employees who are qualified scientifically and practically.

Among the tasks of managing the doors in the Sacred Mosque is guiding worshipers to the places of the chapels, and supporting the security men in diverting and directing the worshipers when the chapels are full, in addition to achieving a smooth movement in entering and leaving the Grand Mosque, and there are doors equipped with light signals and guiding panels that light up in green when The presence of vacant places inside the Grand Mosque, and it lights up in red when the capacity is completed, and not to enter the Grand Mosque at the time when the worshipers leave immediately after the prayer, in order to pay for traffic jams and congestion.

The harvest of the second day in the Tokyo Olympics .. “Arab medal”

Psychologists advised blondes not to answer jokes about their stupidity

After months of mystery, Messi decides to continue with Barcelona

That atrocity was pushed on the Naxalites.! Ashok Gajapati's hand .. Saireddy's sensational letter to the Prime Minister