A Saudi-Jordanian statement: Stressing that the security of the two kingdoms is one 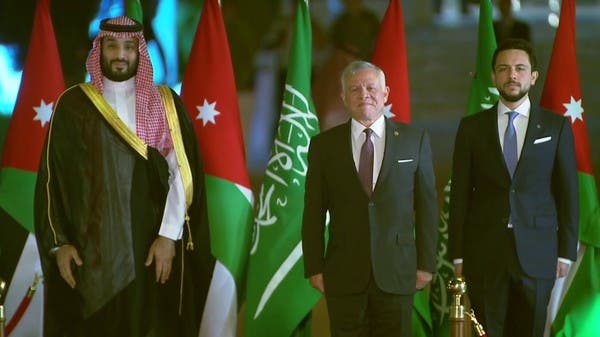 The Jordanian monarch, in the presence of Prince Al-Hussein bin Abdullah II, Crown Prince of Jordan, held an official session of talks, in which the spirit of affection and brotherhood prevailed, which embodies the depth of the close and historical relations between the two kingdoms, during which aspects of cooperation between the two brotherly countries in all fields were reviewed, and ways of enhancing them were discussed to achieve their interests. common.

During the talks, which were attended by senior officials of the two sister kingdoms, the two sides valued the existing efforts to achieve common economic interests under the guidance and support of the leaderships of the two countries.

They stressed the importance of joint action to increase the level of economic and investment cooperation.

The two sides also stressed the importance of following up on the implementation of the results of the meetings of the (seventeenth) session of the Saudi-Jordanian Joint Committee, and the agreements resulting from it, which contributed to expanding and strengthening cooperation in a number of fields.

The two sides discussed economic, trade and investment relations and ways to enhance them, as well as aspects of cooperation in the transport and logistics sector.

The two sides stressed the importance of enhancing joint cooperation in the field of investments and diversifying them, including investment areas for the sectors of mining, infrastructure, agriculture, tourism, culture, health care, and information technology, and creating more job opportunities, which contribute to boosting economic growth in the two countries and serving their interests. common.

The Kingdom of Saudi Arabia welcomed Jordan’s launch of the vision of economic modernization for the next ten years, and the opportunities for cooperation that can be built upon through this vision.

Jordan expressed its appreciation to the Kingdom of Saudi Arabia for its support for development projects in various sectors, especially the transport and energy sector, and the role played by Saudi investments in expanding the various sectors in the Hashemite Kingdom of Jordan.

In the field of energy, the two sides stressed the importance of continuing cooperation in the electrical interconnection between the two countries and enhancing joint cooperation in the field of energy efficiency, innovation and emerging technologies such as artificial intelligence in the energy sector, and the development of clean technologies for the use of hydrocarbon resources in various applications in the industrial and construction fields.

The two sides expressed their aspiration to enhance cooperation in the field of clean energy and carbon capture, storage and use, and to build expertise in this field.

The two sides expressed their aspiration to enhance their cooperation in the areas of food security, health, and education, and to encourage the discovery of new opportunities, especially in the areas of combating global Pandemics and pandemics, and investing in the health sector, digital health, and other health fields.

The two sides stressed the importance of increasing the pace of cooperation between the two countries in the fields of culture, tourism, sports and youth, exchanging and developing partnerships, and exploring the wealth and energies of the two countries, in order to achieve development and prosperity for the two brotherly countries and peoples.

The Kingdom of Saudi Arabia appreciated the support of the Hashemite Kingdom of Jordan for its candidacy to host Riyadh for the World Expo 2030.

They affirmed that the two-state solution is the only way to achieve a just and comprehensive peace, which constitutes an Arab strategic option and a necessity to achieve regional and international security and stability.

They stressed the need for Israel to stop all illegal measures that undermine the two-state solution and the chances of achieving a just peace.

They stressed the need for Israel to respect the historical and legal situation in Jerusalem and its Islamic and Christian holy sites, and to respect the role of the Department of Endowments for Jerusalem and the Affairs of the Blessed Al-Aqsa Mosque of the Jordanian Ministry of Awqaf, Islamic Affairs and Holy Places, as the only body authorized to manage the affairs of the blessed Al-Aqsa Mosque / Al-Haram Al-Sharif, whose entire area constitutes a purely place of worship for Muslims.

On the Yemeni issue, the two sides renewed their full support for the international and regional efforts to reach a comprehensive political solution to the crisis in Yemen, in accordance with the Gulf Initiative and its implementation mechanisms, the outcomes of the Yemeni National Dialogue, and Security Council Resolution No. (2216).

They stressed the condemnation of terrorist acts, practices and attacks carried out by the Houthi militia targeting civilian objects and vital facilities in the Kingdom of Saudi Arabia, threatening the security of international shipping lanes, and undermining efforts to reach a political solution.

The two sides stressed that the security of the two kingdoms is one, and the Hashemite Kingdom of Jordan affirmed Jordan’s absolute support for the Kingdom of Saudi Arabia in all the steps it takes to protect its security, stability and interests.

The two sides affirmed their support for the Presidential Command Council and its supporting entities to enable it to carry out its duties to achieve security and stability in the Republic of Yemen and end the Yemeni crisis.

The two sides called on the international community to pressure the Houthis to abide by the truce, cooperate with the UN Special Envoy for Yemen, and deal seriously with peace initiatives and efforts.

On the Syrian issue, the two sides stressed the need to intensify efforts to reach a political solution to the Syrian crisis that preserves Syria’s unity and territorial integrity, restores security and stability, rids it of terrorism, and creates the necessary conditions for the voluntary return of refugees.

They affirmed their continued support for the efforts of the United Nations and its Special Envoy, and stressed the importance of stopping interventions and projects that threaten the identity, unity and sovereignty of Syria.

The Saudi side appreciated the great humanitarian role that Jordan plays in hosting about 1.3 million Syrian brothers.

They expressed their hope that the Iraqi parties would reach a formula to form an Iraqi government to devote a comprehensive political process that meets the aspirations of all components of the brotherly Iraqi people.

On the Lebanese issue, the two sides stressed the importance of maintaining security and stability and the need to support Lebanon and its brotherly people, and to work to help it in addressing the challenges it faces, the importance of conducting comprehensive reforms to ensure Lebanon overcomes its current crisis, the need to limit arms to legitimate state institutions, and Hezbollah’s commitment not to interfere in The internal affairs of Arab countries and stopping all practices that threaten their security.

Regarding the Iranian nuclear file, the two sides agreed on the need to support international efforts aimed at preventing Iran from acquiring a nuclear weapon, ensuring the peacefulness of Iran’s nuclear program, strengthening the role of the International Atomic Energy Agency, preserving the non-proliferation regime, and creating a Middle East free of nuclear weapons and all weapons. Mass destruction, and support for Arab efforts to urge Iran to adhere to non-interference in the affairs of Arab countries, to preserve the principles of good neighborliness, and to spare the region all destabilizing activities.

The two sides stressed the importance of redoubling efforts to confront extremism and work to combat terrorism in all its forms and forms, confront its ideological roots, dry up its sources, stop all means of financing it, and spread the values ​​of religious, cultural and civilizational moderation.

The two sides affirmed the continuation of coordination, consultation and cooperation between them towards political and security developments and developments on the regional and international arenas, in a way that contributes to achieving security, stability and prosperity for the two brotherly kingdoms and their peoples and the peoples of the region and the world.

Prince Muhammad bin Salman bin Abdulaziz Al Saud, Crown Prince and Deputy Prime Minister, expressed his great thanks and appreciation to King Abdullah II bin Al Hussein for the warm reception and generous hospitality he received and his wishes for the leadership and people of the Hashemite Kingdom of Jordan, the leadership and people, for continued prosperity and stability.