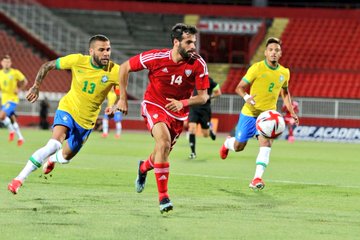 The UAE Olympic football team suffered a severe loss against its Brazilian counterpart, five goals to two, during the friendly match that brought them together yesterday, Thursday in Serbia, at the end of the external camp that the Olympic team is holding there as part of its preparations for the qualifiers for the AFC U-23 Cup scheduled in Uzbekistan in 2022. The Olympic team will play in Group E, which includes Oman, India and Kyrgyzstan, whose matches will be played in October.
Despite the great loss suffered by the Olympic team, the experience is very useful for the players and the technical staff of the Emirates Olympic team, led by Spanish coach Denis Silva, to find out the strengths and weaknesses of the team and to address the mistakes and negatives.

For his part, the Brazilian Olympic team is also preparing to participate in the football competition in the Olympic Games scheduled in the Japanese capital, Tokyo, starting from the 23rd of this month.