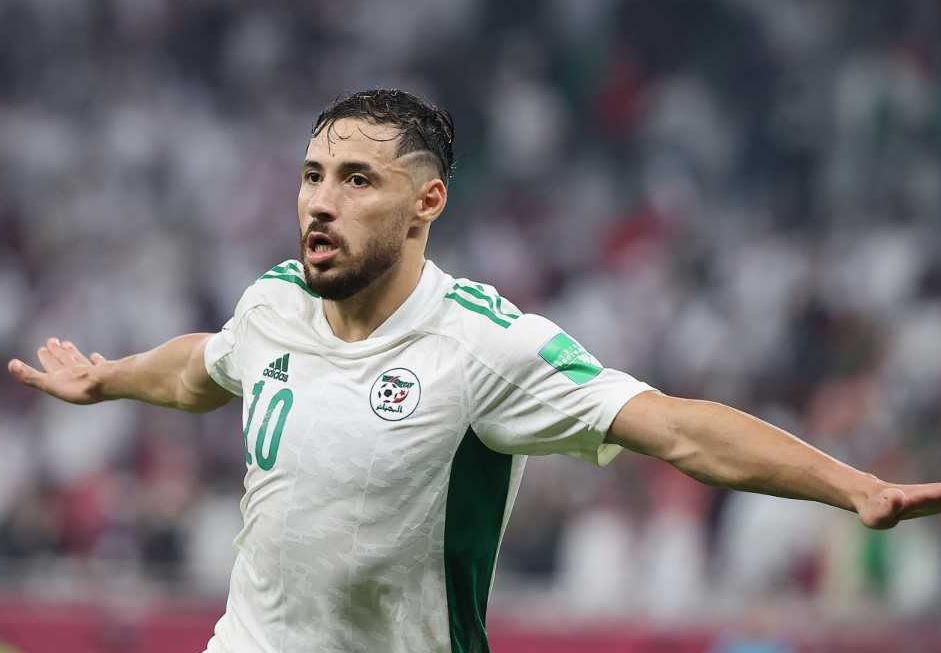 The Algerian national team made a perfect start to its qualifiers for the 2023 African Nations Cup, by defeating Uganda 2-0 in the first round of Group F competitions. And at the “July 5” stadium in the Algerian capital, the “Desert Warriors” duo was signed by Issa Mandy (28) and Youssef Belaili (80).

Consequently, the Algerian team won its first 3 points in the qualifiers to top the group, while the Ugandan team remained without points at the bottom of the standings. The match witnessed pure Algerian control, amid the brilliance of Blaili, the French player of Brest, who constituted a source of great inconvenience and danger to the Ugandans in the left hallway.
After several attempts, Jamal Belmadi’s men opened the scoring, after Blaili took a free kick that reached Islam Soleimani, who turned it into a strong header that hit the crossbar, before it reached Mandy, who hit the net with his shoulder (28).

The Uganda national team received a penalty kick, which was awarded by Farouk Mia, but goalkeeper Mustafa Zaghba starred in stopping it (33). Blaili almost scored a wonderful goal after receiving a high ball from Hussein bin Ayada, so he rose to her with a beautiful scissor, which the goalkeeper narrowly turned into a corner. But Blaili himself insisted, in the second half, that his name be recorded in the list of registered players. He penetrated the Ugandan defense and hit a ground ball that hit the right post and entered the net (80).

On the other hand, Mauritania won a big victory over its Sudanese guest 3-0 in the capital, Nouakchott, in the group nine competitions. The hat-trick of Mauritania was scored by Abu Bakr Kamara (27 from a penalty kick and 30), and Abdallah Mahmoud (77). With that result, the Mauritanian team topped the group IX ranking, with 3 points, while the Sudanese team remained without points.

In Group Twelfth, Senegal defeated Benin 3-1, thanks to a hat-trick scored by star Sadio Mane (12 and 60 from two penalties, and 22), while Benin’s only goal, Junior Olaytan, scored in the 88th minute. It is noteworthy that Benin team completed the match. With ten players since the 51st minute after his midfielder Cisse Dalmeida was sent off.