A video of Jamal bleeding in Saudi Arabia .. She was stuck on an iron fence 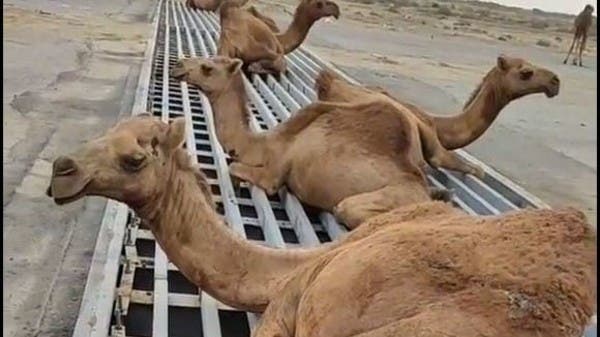 After they were stuck in an iron fence, and a number of passersby saw them, the Livestock Department of the Ministry of Environment, Water and Agriculture in Al-Laith Governorate – western Saudi Arabia – was able to rescue a group of camels.

After receiving a report that 8 camels were stuck in a fence next to the international line, veterinary teams moved to rescue them. All the stuck camels were taken out and first aid was given to the injured by a team led by the veterinarian Assaf Al-Harbi.

The owner was also identified through the slides on the infected one.

For his part, Director of the Office of the Ministry of Environment, Water and Agriculture in Al-Laith Governorate, Eng. Yahya Al-Mahabi, said that the veterinary team initiated the case after receiving a report that the camels had been exposed to that accident, and the camels’ wounds were treated until they got back on their feet.

Social media activists circulated the Al-Laith incident, stressing that the reason was a car crash at the checkpoint, terrifying the camels that were caught in the net, but a woman passing by on the road saw them, informed the concerned, and did not leave until the rescue operation was completed.