A Yemeni woman is making a fuss in America, and the Congress celebrates a year her message about the “veil” 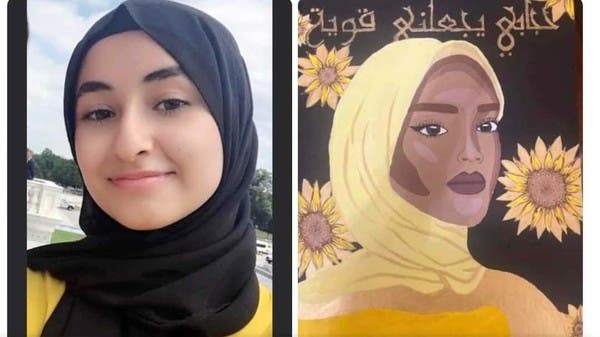 A Yemeni painter sparked controversy in the American street after her painting “My Hijab Makes Me Strong”, written in Arabic, was chosen to be shown for a whole year in the Capitol. The daughter of Al-Yaman Al-Saeed became the first Arab Muslim student to win the 2022 Congressional Art Competition, and her painting is hung in the Central Government Building in Washington.

A message to veiled Arab girls

In addition, the American media circulated the story of the girl, Sally Al-Maklani, who studies at the “Renaissance” High School of Art in New York, after winning first place among all the contestants and winning her painting as the best drawing to represent the state of New York in paintings. Sally is from the village of Ludiya in Al-Dhalea Governorate, southern Yemen.

It is worth noting that Sally’s painting, for which she chose the title “My Hijab Makes Me Strong”, shows a Muslim woman wearing the veil. Her good upbringing and pride in front of other cultures in Uncle Sam’s country.

Commenting on her winning this prestigious competition, Sally expressed in a statement monitored by “Al Arabiya.net” her happiness for this great celebration of her art and her message, noting that she aims through this painting to deliver a message to every veiled girl to be proud of her values ​​and cherish her confidence while wearing her veil, as it represents A source of inspiration, strength and protection for her in the community, and she will continue to present works of art that express Arab culture.”

In turn, Congressman Alexandria Ocasio-Cortez published the announcement of Sally’s victory on her official account on Instagram, and wrote that she chose Sally’s painting because it represents an anti-hate narrative against the veil, considering the painting “a tool for self-expression and empowering young women.” The congresswoman added, “The artist’s portrayal of a radiant young Muslim woman contrasts strongly with anti-Islamic stereotypes and the veil, as well as the color of her yellow veil and dark background, which dazzle the viewer. Beautiful art coupled with a strong message certainly represents my region.”.. to the comments of the street in America between congratulations celebrating the creativity of the Yemeni girl, and a wave of criticism of Congress for choosing a painting by an Arab girl on the subject of “the veil,” which, according to them, contradicts American values, as it restricts women’s freedom according to some opinions.

While the student Sally told the media, that through her artistic work, she hopes that every veiled girl will feel comfortable and confident while wearing her hijab, as it represents protection and strength for her in society.

For its part, the Council on American-Islamic Relations (CAIR) thanked Representative Alexandria Cortez for choosing this painting, and wrote on his Twitter account, “Thank you for choosing this artwork to be shown in the halls of Congress, and congratulations to Sally Al-Maklani for this wonderful achievement! We are very proud! We are excited about the great success.”

One of them described this evaluation and selection as biased towards art, as well as being completely devoid of the ideological criteria and cultural backgrounds of the winner, while another added: “America is a civilized country that wants to convey a cultural message to all sects about the importance of coexistence, religious tolerance, acceptance of others and respect for religions, beliefs and values ​​of peoples.”

While Manal Mustafa considered: “Art can be employed to get rid of ethnic tensions and cultural differences in a healthy way and deliver an inspiring humanitarian message,” adding: “Let’s just hope that the Yemeni girl’s message will contribute to a positive change in society and draw the world’s attention to the suffering of her war-crushed people.” 8 years ago.”

A source of pride and inspiration for Yemeni women

The girl’s father, Muhammad al-Shahtari, said that he had received an official invitation from the US Congress to attend a ceremony honoring his daughter, Sally al-Maklani. He added, “We are proud to have your painting chosen and to highlight its cultural message in front of the world in the centers of global decision-making, and we are very happy with what you have accomplished today, which is a source of pride and inspiration for Yemeni women in particular and Arab women in general.”