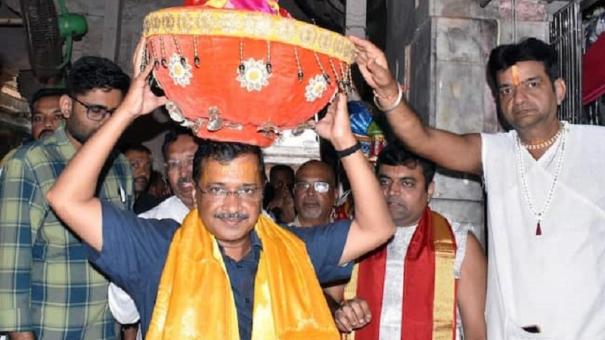 Surat: “People of Gujarat are unhappy with the ruling BJP. People are very angry especially with the attack on Aam Aadmi Party leader in Surat city. Therefore Aam Aadmi Party will win in 7 out of 12 constituencies in Surat alone,” said Arvind Kejriwal.

Aam Aadmi Party convenor and Delhi Chief Minister Arvind Kejriwal left for Gujarat today. There he met the media in Rajkot. He then criticized the attack on Aam Aadmi Party leader Manoj Soradia in Surat. According to him, the BJP has launched a murderous attack on Manoj. They have broken his skull in front of the Lord’s shrine. This is not the culture of our nation. It is not Hindu culture either. Neither is the culture of Gujarat.

The attack has enraged the people of Surat. We did a study in Surat. AAP has support in 7 out of 12 constituencies. Chances of success in them are also bright. This evening I will go to the same Ganesh pandal where the Aam Aadmi worker was attacked and participate in the aarti. It is usual to engage in these kinds of attacks when there is fear of failure.

I want to say something to the BJP people. So far you have handled the Congress. We are not Congressmen. We believe in Sardar Vallabhbhai Patel and Bhagat Singh. We will fight bravely. BJP is trying to blackmail the Aam Aadmi Party by controlling the media in Gujarat. The Aam Aadmi Party is not allowed to publish or telecast its interviews and it causes obstructions such as not calling them for TV debates. So I have asked the Aam Aadmi Party to campaign hard on social media,” Kejriwal said.

Will shake the 24-year rule? – BJP has been in power in Gujarat for the past 24 years. After winning the Punjab elections, Kejriwal had said that their goal was to oust the BJP government there. In this case, he has now talked about the people’s opposition to the BJP in an interview given in Surat. As the state of Gujarat is going to face assembly elections soon, the BJP is making serious efforts to maintain its rule and the Aam Aadmi Party to establish themselves there. But the Congress is struggling there because of the resignation of Hardik Patel and the resignation of the Gujarat Congress President.