Abdullah Salem: “Uncle” Majid Nasser is the reason for my love for goalkeeper and Al Wasl 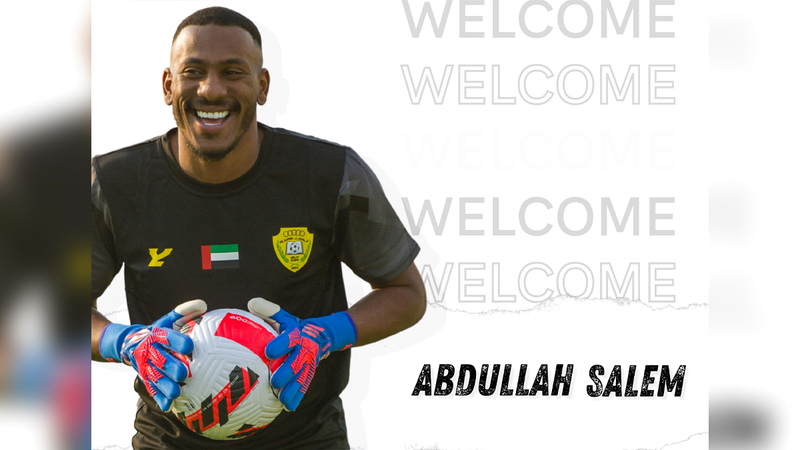 The goalkeeper, Abdullah Salem Nasser, expressed his happiness to join the ranks of Al-Wasl Club starting from next season, coming from Fujairah Club in a free transfer deal, pointing out that his uncle Majed Nasser, the former goalkeeper of the “Emperor”, and the goalkeeper of Al-Ahly youth, is one of the main reasons His choice to play in the goalkeeper position, in addition to his love for Al-Wasl since his childhood.

Abdullah Salem (23 years) told “Emirates Today” that he is proud of his joining Al-Wasl, stressing that he fulfilled his dream of playing in the ranks of the “Panthers”, stressing that it is his favorite team for several considerations.

He explained: “There is no doubt that my uncle Majed Nasser played a major role in my close association with Al-Wasl Club since childhood, especially when he was playing in the team before moving to Al-Ahly youth, while on the other hand, Al-Wasl fans are important factors that attract any individual to encourage the team, and motivate Any player to join his ranks, as Al-Waslawi fans have a special love for the club at all times and different circumstances.”

He added, “Majid Nasser is my idol, and he loved football and goalkeeper, and I hope that I will live up to the expectations of the Al Wasl club management and the (Al-Asfar) fans that I will perform at a good level and help the team achieve victories next season.”

He indicated that he did not need to think about accepting Al-Wasl’s offer, and said: “Al-Wasl’s desire to contract with me made me agree immediately, because this, as I mentioned, is the dream of my life to wear the (Emperor) shirt, especially since it is one of the most prominent clubs in the country, and is considered A very big risk in my career, as I hope to be up to the responsibility entrusted to me, and that my joining Al Wasl will be my way to be called up in the future for the national team.”

As for the impact of his joining with his brother Nasser Salem to Al-Wasl, he said: “Certainly, it is a great incentive for me to join my brother in Al-Wasl, as we will give everything we have to prove our worth to get this important opportunity in our career.” Abdullah Salem confirmed that Al-Wasl’s preparations for the next season bode well for the team’s appearance, and said: “There is a wonderful situation that the club is living in at the present time in terms of the preparations made by the administration, and this motivates the players to provide their best.”

On the other hand, he expressed his happiness with Omar Abdul Rahman joining Al Wasl, and said: “The contract with the national team star Omar Abdul Rahman is a great addition to the team, as he is the best player with skill in the Emirates, and his presence will certainly contribute to improving the team’s performance, because of his wonderful capabilities.”

He concluded his statements by saying: “I thank the administration of the Fujairah Club for agreeing to my transfer to Al-Wasl Club, and to all the players, and I wish success to (Wolves) in the next stage. What I have, and to seize this opportunity well.”

Goalkeeper Abdullah Salem Nasser praised the Al Wasl fans, and said: “The Al Waslawi fans will play a big role in the team’s appearance well, and for my part, I feel very happy that I will have the opportunity to play in front of the (Emperor) audience, especially since it is characterized by its constant support for the players, and its positive impact on their appearance in a way. Good”.

• “I hope that joining Al Wasl will be my way to be called up in the future for the national team.”

• The joining of my brother Nasser to Al-Wasl represents a great incentive to provide all we have.