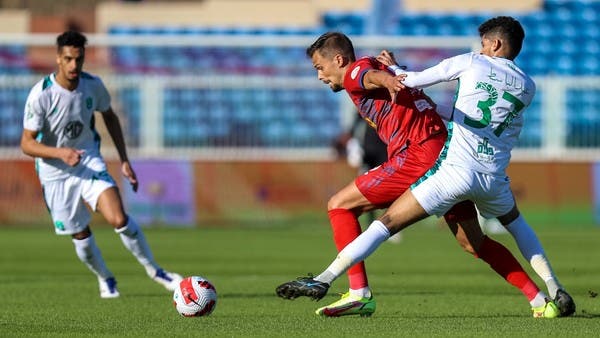 Abha regained the tone of victories after winning against its guest, Al-Ahly Jeddah 2-0, in the confrontation hosted by Prince Sultan bin Abdulaziz City Stadium in Mahalla, while Al-Ettifaq bandaged its wounds after it swept its host Al-Hazm 3-0, in the 12th stage of the Mohammed bin Salman Professional Cup League on Sunday.

At Prince Sultan bin Abdulaziz City Stadium in Mahalla, Abha regained the tone of victories after winning against its guest, Al-Ahly Jeddah, 2-0.

Al-Ahly performed well in the first half, and its Brazilian defender Danclair scored a goal in the 16th minute, but the referee canceled it after returning to the video technology for offside.

The first half did not witness any danger from both teams, with the exception of Abha’s chance at the 41st minute, which was scored by Dutch striker Michael T. Freddy, who was canceled by the referee after returning to the video technology for offside.

In the second half, Abha imposed his control and made clear his desire to seize the victory, unlike Al-Ahly, whose players did not appear at their well-known level.

Abha waited until the 75th minute, when he scored the first goal through Dutch striker Michael T. Freddy, who followed the shot of his Tunisian colleague Saad Bakir to turn the ball past Al-Ahly.

And at the 80th minute, the game became more difficult for Al-Ahly after its Brazilian defender Danclair was expelled for obtaining a second yellow card.

Abha intensified its attack, and Tunisian striker Saad Baqir scored the second goal in the 85th minute through a penalty kick.

With this result, Abha’s balance rose to 13 points to advance to 11th place, and Al-Ahly remained on its previous score of 15 points to remain in seventh place.

In Al-Rass, Al-Ettifaq bandaged his wounds after sweeping his host Al-Hazm with three goals.

The goals of the agreement were scored by Swedish player Robin Quayson in the 45 + 2 minute, Moroccan striker Walid Azzaro in the 84th minute, and Slovakian defender Philip Keish in the 87th minute.

With this result, Al-Ettifaq’s balance increased to 13 points, advancing to the tenth position, and Al-Hazm remained on its previous score of 10 points, to fall to the 14th position.