Abu Bakr transfers victory to the quarter-finals in 11 minutes 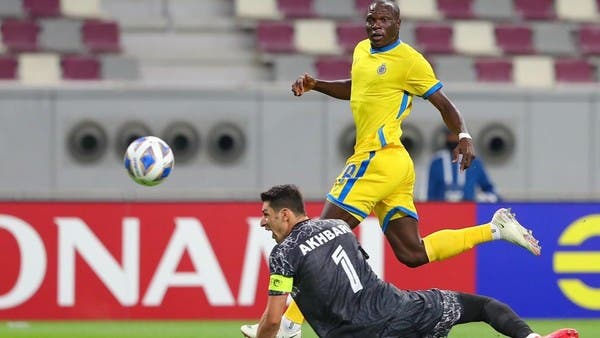 The Saudi victory booked its place in the quarter-finals after its difficult victory against its Iranian guest Traktor 1-0, in the confrontation hosted by Khalifa International Stadium in the Qatari capital, Doha, in the eighth round of the Asian Champions League, on Tuesday.

Al-Nasr performed well in the first half, as it imposed its dominance and had more than one chance that was enough to settle the match early.

Al-Nasrawiya’s first chance came after 9 minutes, when Cameroonian striker Vincent Abubakar received a special pass from his colleague Abdel Fattah Asiri to face the goal and hit the ball, but it went outside the goal.

In the 11th minute, Cameroonian striker Vincent Abubakar scored the first goal after receiving a unique pass from his Brazilian teammate Talisca to face the goal and hit the ball into the net.

Al-Nasr continued its attack, and its Brazilian player Talisca almost scored the second goal when he hit a powerful ball from outside the penalty area, but it found goalkeeper Mohamed Reda, who saved it.

Before the end of the first half, Al-Nasr player Abdel Fattah Asiri missed a goal after receiving a pass from his Uzbek colleague Masharipov to face the goal and hit the ball, but it hit the crossbar.

In the second half, Al-Nassr continued its advantage in the first ten minutes, and its striker, Vincent Abu Bakr, missed a goal after receiving a goal in front of the goal from his colleague Abdel Fattah Asiri to hit the ball, but it found goalkeeper Mohamed Reda, who narrowly missed it.

Al-Nasr’s performance declined, which made the Traktor players take the initiative in search of the equalizer, as he succeeded in imposing his control over the midfield, but his attempts did not pose a threat to goalkeeper Walid Abdullah.

Traktor intensified his attempts in the last minutes, but Al Nasr defenders and goalkeeper Walid Abdullah succeeded in securing the result, ending the match with a clean goal.