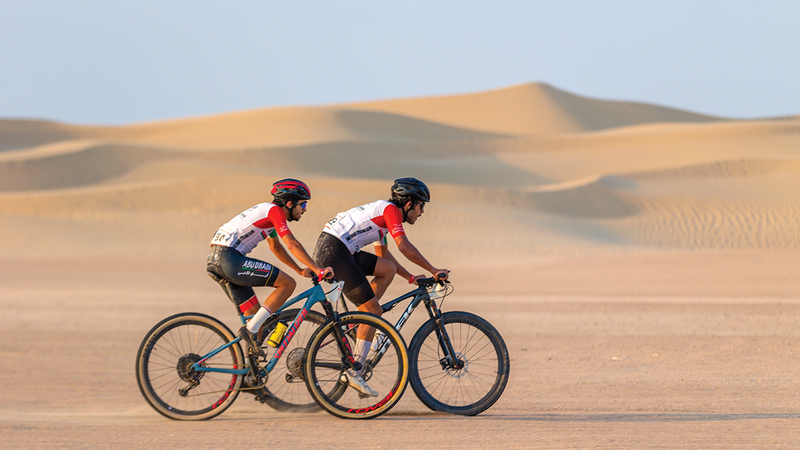 The Abu Dhabi Cycling Club and the Dubai Police team excelled in the desert race in the Peace Cycling Championship for Emiratis by winning the amateur and professional titles that were held yesterday, and it is the fourth race within the seventh season of the Peace Cycling Championship, which is organized by the office of His Highness Sheikh Mohammed bin Rashid Al Maktoum – Procurement and financing.

The peace area and its sand dunes and lakes were adorned with the most beautiful forms of competition presented by the UAE cycling champions. The competitions were held amid various natural challenges within the chosen path. Skill in penetrating water challenges that included puddles and muddy areas that require high skill and physical strength to pass.

The race extended for a distance of 68.7 km, in the middle of the Marmoum Reserve, the largest nature reserve in the world, which is located within the Seih Al Salam area, which is characterized by its picturesque natural features and rare livestock that make it one of the most important areas of the countryside and wilderness of Dubai, and one of the most important destinations in Dubai within the «the most beautiful winter in the world ». .

Omair bin Juma Al Falasi, Executive Chairman of the Office of His Highness Sheikh Mohammed bin Rashid Al Maktoum – Procurement and Finance and Chairman of the Supreme Organizing Committee for the Championship, raised his highest thanks and gratitude to His Highness Sheikh Mohammed bin Rashid Al Maktoum, Vice President and Prime Minister of the UAE and Ruler of Dubai, for His Highness’s vision and directives to organize this championship and provide all means of support for it, and allocate a budget of five million for the seven races champions during the season.

Al-Falasi said in a press statement that: “The organizing committee is keen every season to choose tracks that increase the strength of competition, and mobilize the skills and capabilities of the participants in various categories. The course of this race was chosen to be full of natural challenges, through the presence of water, sand dunes and the different nature of the tracks.” Which combines hard, muddy, sandy and rocky areas, which are aspects that increase the magnificence of the challenge and refine the skills of the riders and give them additional skills to deal with different types of bikes and tracks. The rare animals that live in it, in addition to the riders showing great technical and physical capabilities.