Abu Jabal and Hamed threaten Zamalek with the “Sports Court” 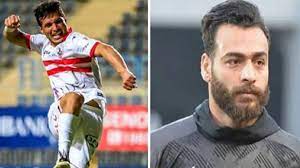 The crisis of the Zamalek club duo, Muhammad Abu Jabal and Tariq Hamed, with the management of the White Castle escalated, after leaks came out regarding 25% of the players’ financial dues for evading the Al-Ahly match in the league.
The Egyptian “ETC” channel stated that the two players are in a state of anger over the decisions that are expected to see the light of day in their right soon, with a 25% deduction from their financial dues, as the two players intend to file a club complaint to the Sports Court if the discount is made.
And the general supervisor of the ball in the Zamalek club, Amir Mortada Mansour, had confirmed earlier, that Abu Jabal and Tariq Hamed would not be present at the club next season, and talk about their survival has been completely closed.
Egyptian media reports confirmed that there are attempts to bring the views closer between Zamalek and Tariq Hamed, especially since the two parties still have the intention to continue their relationship in the coming seasons, while there is no intention for Muhammad Abu Jabal to stay because of his decline in his level and his refusal more than once to meet his officials to extend his contract.