IndiaActress Shreya visits Tirupati Ezhumalayana with her husband- Controversy over kissing outside...
India 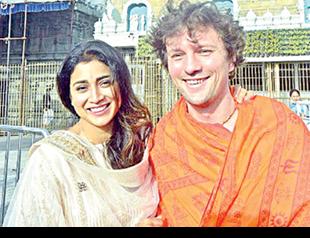 Actress Shreya was her husband yesterday Andrei Kochev With Tirupati He saw the seven mountains.

Actress Shreya was married to Russian tennis player Andrei Kochev on March 12. In this situation Shreya was with her husband yesterday Tirupati Thirumalai had come to visit Ezhumalayana. The couple visited Swami during a VIP break darshan. Following this, they were honored with theertham and offerings at the Ranganayaka Mandapam. After that, some of them came out of the temple and were photographed.

Then, to Shreya Andrei Kochev Kissed. Shreya later told reporters, ‘Rajamavuli is about to emerge in the movement R.R.R. I have acted opposite actor Ajay Devgan in the film. I have acted in the movie ‘Kamanam’ which has been released in many languages ​​and it is also out. ‘

In this situation, her husband kissing Shreya in front of the temple has caused a new controversy. Considered a sacred site Tirupati Some have questioned whether to kiss in front of the tower of the Ezhumalayan temple.

Previous articleIn India, 6,800 people have been killed in rains and floods in the last three years
Next articleThe voice Peru senior Daniela Darcourt chose the contestant who sang her song “Probably”