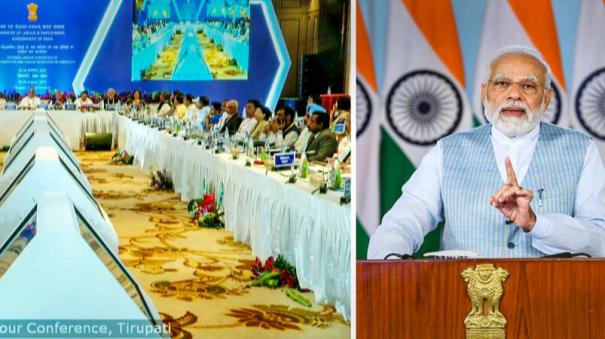 In this, 25 State and Union Territory Labor Ministers participated. In this, Prime Minister Modi spoke through a video: The role of workers is very important in the development of our country as a developed and strong country in the world. That is why various central government welfare schemes like Pradhan Mantri Srama-Yogi Mandan Yojana, Suraksha Bhima Yojana, Jeevanajyothi Bhima Yojana etc. are in force for them.

1.5 crore workers stood like a barricade during the corona period. Their role is very important for the development of the country. A website called e-Srama has been launched to protect the welfare of workers.

In this, 28 crore workers from 400 regions have registered their names in a single year. This mainly benefits construction workers and migrant workers. In this, I request you to link the State Labor website. For the past 8 years, the central government has been working to abolish slavery in the labor laws. Prime Minister Modi spoke thus.