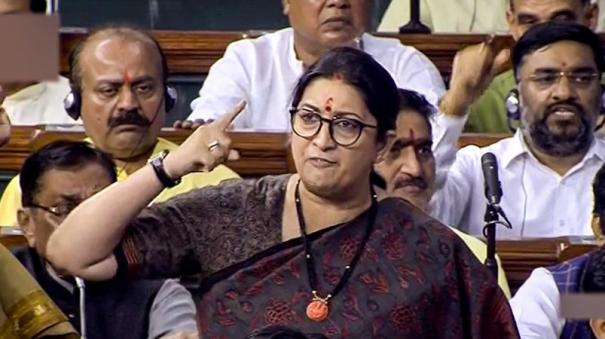 New Delhi: Congress MP on President Dravupati Murmu Yesterday, there was a fierce clash between BJP and Congress MPs in Parliament over the controversial comments made by Adhir Ranjan Chowdhury.

Congress MP from West Bengal Adhir Ranjan Chowdhury gave an interview to reporters in Delhi yesterday. He spoke controversially about the then President Dravupati Murmu. The video went viral across the country.

Speaking in the Rajya Sabha, Union Finance Minister Nirmala Sitharaman said, “Congress party has been spewing hatred ever since Drarubathi Murmu was announced as the presidential candidate. Congress MP Adhir Ranjan Chaudhary has defamed Murmu, who is the highest office holder in the country. He denies that he has spoken out of hand. But he has deliberately spoken rudely. “Congress President Sonia Gandhi should apologize in the matter,” he asserted.

All the MPs of the BJP-led National Democratic Alliance raised their voices to insist on the same demand. Due to this Rajya Sabha was adjourned till 12 noon. Even when they reconvened, BJP MPs raised the issue. Hence they are postponed till 2 pm. After this they were adjourned for the rest of the day.

The same issue was raised in the Lok Sabha. While speaking, Union Minister Smriti Irani said, “Congress MP Adhir Ranjan Choudhary has spoken very badly of the President. The Congress and its party leader Sonia Gandhi should apologize publicly in this matter. The Congress cannot tolerate the appointment of a tribal woman as the President of the Republic.”

As Sonia left the Lok Sabha, BJP MPs chanted that Sonia should apologize. Enraged by this, Sonia, BJP MP. He went to Rama Devi and questioned, “Adhir Ranjan has apologized for speaking out of hand. Why is my name being dragged into this matter?”

Then Smriti Irani said, “I am the one who mentioned your name. Talk to me no matter what.” To this, Sonia angrily replied, “You don’t need to talk to me. You shouldn’t even utter my name.” Smriti asked, “Why should I remain silent. How can I be told not to mention your name?” Later, Minister Pragalad Joshi and Nationalist Congress MP Supriya Sule intervened and pacified the two.

Will not apologize to fraudsters: Adhir Ranjan

Adhir Ranjan says, “I am from West Bengal. My mother tongue is Bengali. I have no knowledge in Hindi. I mumbled in Hindi. I will directly apologize to the President if he is offended. I will not apologize to scammers. “Nobody can forget what these fraudsters said about Sonia and Sasitharoor’s wife,” he said.

But a few years ago, in a post on Sikh riots on Twitter, he caused controversy by saying, “When a big tree falls, it is normal for the earth to shake.” Also, Adhir Ranjan Chaudhary created a big controversy when he said that Prime Minister Modi is a refugee who came to Delhi from Gujarat, former Prime Minister Indira Gandhi is like the Ganges and Prime Minister Narendra Modi is like a sewer.