African Nations Championship.. Morocco gets rid of the most difficult match in its group (photos) 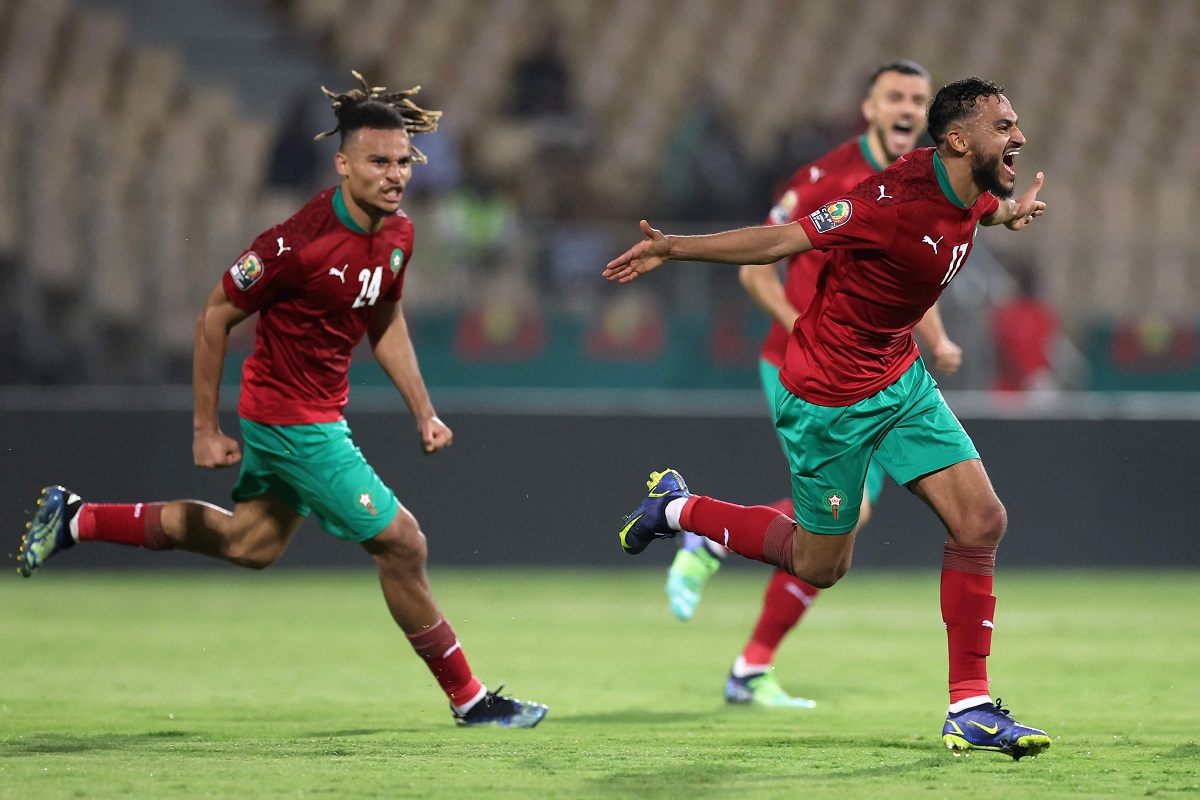 Sofiane Boufal led the Moroccan national team to a victory over Ghana “Black Stars”, 1-0, today, Monday, in the first round of Group C of the African Nations Cup, currently being held in Cameroon.
Boufal scored the only goal of the match for the Moroccan team in the 83rd minute of the match, as the Moroccan team got rid of the most difficult match in its group.
The first round matches will resume in the same group, with a match between Comoros and Gabon later on Monday.

The Moroccan team, which is seeking its second title in its history and the first since 1976, achieved the most important thing by winning the three points in light of the difficult circumstances in which the match was played, especially the absence of its offensive arsenal, most notably Sevilla’s Spanish striker Youssef Al-Nusairi and his Andalusian club colleague Mounir Al-Hadadi, who is infected with the “Covid-19” virus. With Eyup Al Kaabi (Hatayspor, Turkey) and Ryan Mayi (Fernavros of Hungary).
It is Boufal’s second international goal with his country, as well as Morocco’s first goal against Ghana in the continental finals since Khaled Al-Abyad on March 16, 1980 in the group stage.

Morocco avenged its loss to Ghana 0-2 in the group stage also for the version hosted by the “Black Stars” team in 2008, achieving its second victory over the latter in four confrontations between them, where they tied negatively in 2002 in Mali.
Moroccan-French Bosnian coach Vahid Halilhodzic expressed his great happiness with the victory, despite the absence of an impact on the offensive line.
After the match, he said, “I am very happy with this victory and very proud of the performance, determination and fighting spirit of the players, as well as our success in scoring the winning goal despite the absences affecting our ranks.”
He added, “Of course, the absence of Mayi, Al-Nusairi and Al-Kaabi was very impressive. They are key players in attack, but I included substitutes for them in positions where they played for the first time and performed well.”
For his part, the captain of the “Atlas Lions”, Wolverhampton’s defense pole, Roman Sais, said, “It was a very difficult match and I said that before the match. Ghana is one of the best teams in Africa and we knew before this match that we had to fight and then play and this is what we did. All the players played a match They played well and played with good spirit and mentality.”
Halilhodzic kept Italian Fiorentina midfielder Sofiane Amrabat on the bench, preferring Franfaros defender Sami Mayi. He also pushed Angers midfielder Ezz El-Din Unahi for the first time in the midfield at the expense of Eintracht Frankfurt player Ayman Barrouq, who was infected with the Corona Pandemic, and Alkmaar striker Zakaria Abu during the expense of the English Queens Park Rangers playmaker Elias Shaer.

The Ghanaian team, the defending champion four times, the last of which was in 1982, pressed at the beginning of the match, taking advantage of the Moroccan team’s retreat to the defense, and they got three corner kicks without danger, before the “Atlas Lions” imposed their control and possession of the ball and launched attacks through the French defender Paris Saint-Germain. Achraf Hakimi and Watford defender Adam Massina.
The first and relatively dangerous opportunity for the two goals was a direct free kick for Ghana from 25 meters, and the English Arsenal midfielder Thomas Partey went over the crossbar (33).
Belgian Standard Liege midfielder Salim Amalah responded with a great individual effort in the midfield, as he manipulated more than one player and hit a powerful left ball from outside the area next to the left post (34).
Sais almost did it with a header from close range after a side kick kick that Boufal had thrown over the crossbar (40).
The Moroccan team rushed towards the attack at the beginning of the second half, and Boufal almost did it with a heel game from close range after a pass from Unahi, but it hit the English Reading defender Abdel Rahman Baba and turned into a corner (52).
Abu received a midfield ball and slowed his move towards the goal before he shot it next to the right post (58).
Seville goalkeeper Yassin Bono saved his goal from an investigator by brilliantly banishing a shot from the Belgian Genk wing, Joseph Paintsil, from outside the area to a corner (72).
Halilhodzic pushed Belgian Lagantoise midfielder Tariq Tisodale in the place of Watford midfielder Imran Loza (78).
Boufal succeeded in opening the scoring when he took advantage of a ball that Barty grabbed from Abu during the inside of the area and hit it powerfully with his right from close range in the right corner (83).
Substitute Tisodale almost did it with a strong shot from inside the area, which was pushed away by the goalkeeper with difficulty, before it was prepared in front of the other substitute, Sufian Rahimi, who crossed it in front of the goal, which was pushed away by the defense (90 + 2).