Afridi’s daughter waved the Indian national flag during the Pakistan match – what was the reason? 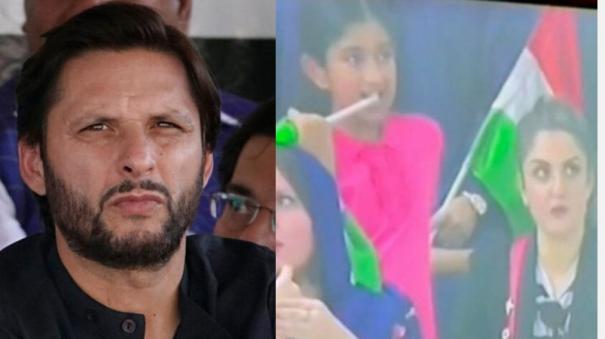 Lahore: Shahid Afridi said that his daughter held the Indian national flag during the India-Pakistan match in the ongoing Asia Cup T20 series.

India and Pakistan clashed in the Asia Cup T20 series last week. Pakistan beat India in the Super-4 round match with a huge victory. Chasing a target of 182 runs, Pakistan reached the target in 19.5 overs for the loss of 5 wickets. Mohammad Rizwan helped the team by scoring 71 runs off 51 balls. Shahid Afridi said that it was during this match that his daughter waved the Indian national flag.

Afridi revealed this while talking to a Pakistani TV channel and explained the reason for it. In it, “My wife told me that 10% Pakistani fans are in the stadium and the rest are Indian fans. Pakistani flags were not available there, so my younger daughter was waving the Indian flag. I wasn’t there. However I got the video. I didn’t publish it because I didn’t know if it would be shared online or not,” he said.

This action of Afridi’s daughter has left the Indian fans in awe. It is noteworthy that Afridi, who went abroad a few years ago, posed holding the Indian national flag while meeting Indian fans there.