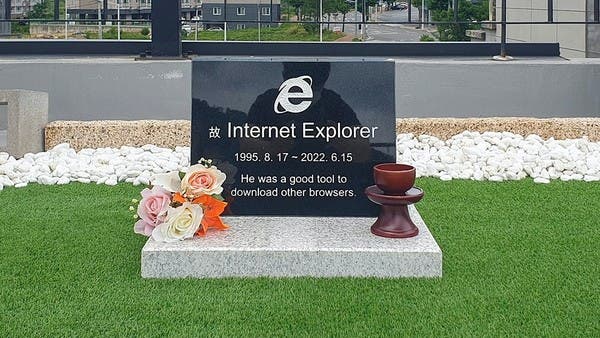 A South Korean computer engineer built a tombstone whose photos spread widely across social networks, in honor of the “Internet Explorer” memory, on the occasion of the cessation of the American giant “Microsoft” group’s work in this famous web operator.

In contrast to many other countries, Internet users in South Korea, which includes one of the fastest communication networks in the world, have adhered to using Internet Explorer, which Microsoft officially ended its work on Wednesday after 27 years of its launch.

Tomb on the roof of a cafe

And on the occasion of the end of the browser, the 38-year-old engineer Kyung Jung set up a tombstone on the roof of a cafe in the city of Gyeongju in southern South Korea, with the famous letter “e” that appeared on hundreds of millions of computers for many years around the world, accompanied by the phrase “That was a good tool to download other browsing systems.

While the pictures of this strange “burial” spread widely across social networks, especially through “Redd”, which its users liked tens of thousands of times.

Soon after its launch in August 1995, Explorer quickly surpassed rival Netscape, the first browser in the history of the Internet, to the extent that it acquired more than 90% of the sector’s shares at the beginning of this century. However, the browser has fallen sharply in recent years, after many users complained of slowness and recurring problems.

Its use is mandatory

But this was not the case in South Korea, where the use of “Explorer” remained mandatory in banking services and e-commerce operations until about 2014.

Also, “Explorer” remained until a few years ago when the browser used automatically for many South Korean government websites, according to the local press.

Kyung Jong told AFP that in his work as a software engineer and website developer, he constantly “suffered” from compatibility issues between different programs due to Internet Explorer.

He added, “In South Korea, when working in the field of website development, you are often expected to provide a program that is compatible with Internet Explorer and not with Chrome,” the browser of the American giant Google group, which currently accounts for three-quarters of the global market for browsing systems, according to the website. Kinsta” Specialist.

And Microsoft announced since last year that June 15, 2022 is the date of stopping the work of the “Explorer” browser, which witnessed 11 consecutive copies.

In practice, it will still be possible to use Explorer, but Microsoft will stop updating or modifying it.