After the honorary corridor .. Real Madrid sends Levante to the second division 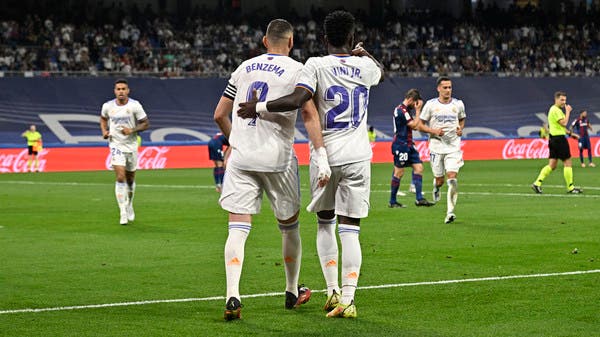 Real Madrid pushed its guest Levante to the second division, after crushing it 6-0, on Thursday, in the thirty-sixth stage of the Spanish Football League.

The balance of Real, who lost the derby of the Spanish capital against its arch-rival Atletico in the last stage, rose to 84 points at the top of the tournament, which was officially crowned this season earlier.

On the other hand, Levante’s balance froze at 29 points, to remain at the bottom of the standings with 29 points, and to confirm its relegation to the second degree, in light of its 6 points difference behind Cadiz, who is in the seventeenth place (fourth from the bottom), the first safety positions, noting that Levante established an honorary corridor Real Madrid in the honor of winning the league title.

In the event that Levante wins the remaining two matches in the championship this season and Cadiz loses them, the two teams will be equal in the balance of 35 points, so that they will then resort to direct confrontations, which in this case is in the interest of Cadiz.

The two teams tied 1-1 in their direct confrontation in the first leg of the competition, before Cadiz won 2-0 in the second round.

Despite the great victory of Real, but it was achieved with the least effort, and its stars could have added more goals, if not for the resort of its players to the show on the one hand, and the misfortune that chased them on the other hand.

Ferland Mendy opened the scoring for Real in the 13th minute, before Karim Benzema and Rodrygo added the second and third goals in the 19th and 34th minutes, respectively, while Vinicius Junior added the fourth goal in the 45th minute.

Vinicius added the fifth and sixth goals for Real in the 68th and 83rd minutes, respectively, to establish himself as the undisputed champion of the match, after scoring 3 goals (hat-trick).