After winning a mental arithmetic competition, a happy reception for a Saudi girl 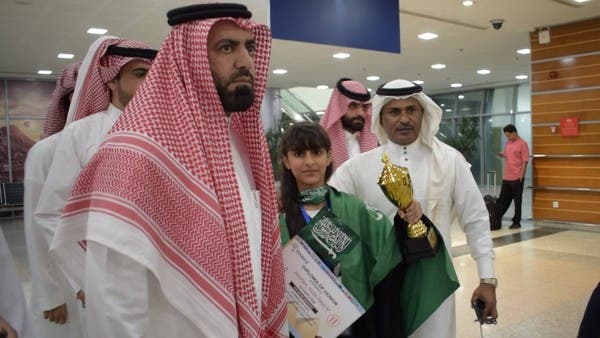 The people of Tabuk region received the student Aitzaz Saad Al-Nafiei at Prince Sultan bin Abdulaziz Airport, after she won second place in the world in a mental arithmetic competition, which was held in Egypt.

In an interview with Al Arabiya.net, the student expressed her happiness with what she achieved in this global competition, presenting this achievement to the Custodian of the Two Holy Mosques King Salman bin Abdulaziz, Crown Prince Muhammad bin Salman, Prince Fahd bin Sultan bin Abdulaziz, Governor of Tabuk, and to the entire Saudi people.

For his part, her father expressed his pride in his daughter achieving this global position in the mental arithmetic competition, saying, “It is an achievement for the country, and everyone is happy with this excellence, which is recorded by the sons of the country in various fields, and happiness is not enough for me amid this great reception from the people.”

The student’s mother, Azzaz, with tears filling her eyes with joy, stated that today she feels an indescribable happiness, especially in the midst of this large crowd, who came to share her daughter’s joy of this achievement.

She also added, “Atazaz was aspiring to first place, but what she has achieved is a pride for us and for the country, and praise be to God, she has achieved what she aspired to, as she had ambition, determination and will since she began training intensively several months before the start of the competition.”

Meanwhile, her teacher, Fida Ghanem, confirmed that Etaz is one of the talented students since she registered in the program four months before the competition began.

She explained that she began intensive training to qualify and prepare her for the competition in a short time thanks to her distinguished mental abilities in calculating mathematics that enabled her to win.

It is noteworthy that the Little Genius program for mental intelligence is a global program that develops the child’s mental skills and raises the level of his intelligence and the space for his use of his mind, as the program works through the science of mental arithmetic, and does not depend on the level of intelligence of the children enrolled in the program, as it builds skills that do not exist in the child Natural, and increases the child’s use of his mind, it is intended for all mental levels.