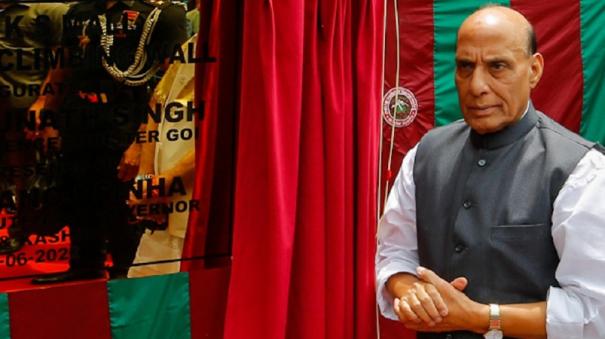 Kashmir: Defense Minister Rajnath Singh has said that the Agni Path project has given a golden opportunity to the youth to join the Armed Forces and serve the motherland.

He also said that the announcement of age relaxation in the scheme shows the interest of the government in the youth. It is noteworthy that Union Minister Rajnath Singh has said this as the youth struggle against the Agni Path project has intensified across the country.

He is on a two-day visit to Jammu and Kashmir. The government has announced that the age limit for joining the army will be raised from 21 to 23 under the Agni Path project in 2022, on the instructions of Prime Minister Narendra Modi, for the future welfare of the youth.

The government’s age relaxation announcement shows the government’s concern for the welfare of the youth. The recruitment process will begin soon with the Ministry of Military Affairs, Ministry of Defense and Defense. The youth should join the army and serve the motherland under the Agni Path project, ”he pleaded.

He later attended the 9th Executive Committee and 4th General Committee Meeting of the Jawahar Institute of Mountaineering and Winter Sports in Pahalgam.

Speaking on the occasion, Rajnath Singh said, “Jawaharlal Nehru is one of the leading training institutes for mountaineering and winter sports. Mountaineering and related activities increase physical endurance and bring morale and excitement.

It is commendable that women are now becoming more and more involved in these male-dominated sectors, ”said Union Minister Rajnath Singh.

Meanwhile, youths interested in joining the army are fighting in Bihar, Jharkhand, Uttar Pradesh, Rajasthan and Haryana to withdraw the Agni route project.

Earlier, the Union Cabinet had recently approved the introduction of the Agni Path project to reduce pension expenditure in the Army. It was announced that the selected players can work on contract basis for a period of 4 years. Of these, 25 per cent will be employed for 15 years in the army, while others will be paid between Rs 11 lakh and Rs 12 lakh without retirement.