Agni Path Project; Opposition to the trial of Rahul Gandhi – Congress appeals to the President 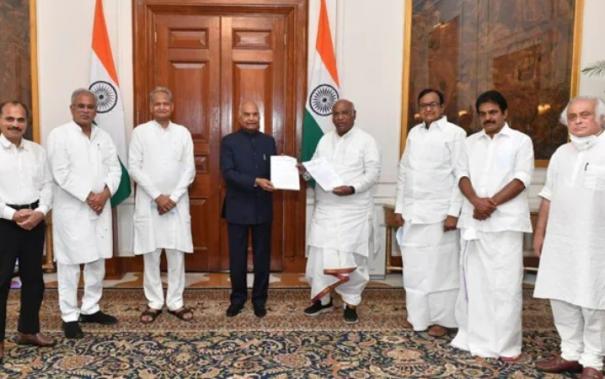 New Delhi: Top leaders of the Congress party met President Ramnath Govinda yesterday. During the meeting, they spoke about the issue of police mistreatment of party MPs during the struggle to withdraw the Agni Path project, as well as the issue of Rahul Gandhi being investigated by the Enforcement Department.

Speaking after the meeting, Mallikarjun Karge said, “The federal government has not consulted on the Agni Path project. The project has not been tabled in Parliament. We have informed the President that this is an act that violates our democratic rights. We urge the President to take note of this.”

Speaking on the occasion, P. Chidambaram said, “We have informed the President about the police atrocities against the Congress leaders. We have asked the President to investigate the matter and refer the matter to the Parliamentary Privilege Committee. The President has promised to consider this and bring it to the attention of the Government.”