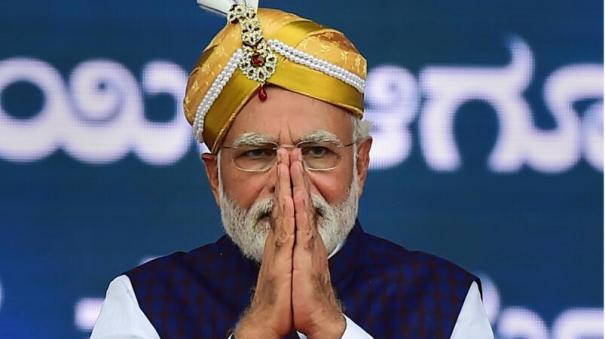 Bangalore: Prime Minister Narendra Modi arrived in Bangalore yesterday on a 2-day visit. There he initiated infrastructure projects worth Rs 27,000 crore for the Yeshwantpur Railway Station, the Bangalore Cantonment Railway Station and the suburban rail project.

Apart from that he opened a brain research center in Bangalore. He then inspected 5 National Highway projects being implemented in Karnataka, 7 railway projects and works related to the recently opened refrigerated Visvesvaraya Railway Station. The following evening Dr.. P.R. He inaugurated the new campus of the Ambedkar School of Economics and the statue of Ambedkar.

The people of Karnataka will greatly benefit from the Rs 27,000 crore infrastructure projects launched in Karnataka. The day is approaching when Karnataka will become a fully developed state. Suburban rail projects will significantly reduce traffic in Bangalore.

We have taken the train service to people who have not even thought about the train. The railway sector has also started providing parallel travel facilities to airports. Visvesvaraya Railway Station is a direct example of this. Thus he said.

When Modi was traveling on the Mysore road, the BJP gathered there greeted him and shouted slogans. So he opened the car door and waved to the volunteers as he stood in the facade.

Addressing a public meeting that followed, Prime Minister Modi alluded to the opposition to the federal government’s Agni Path project. He said, “Even if there are protests against some of the plans now, some of the government’s decisions at this time may seem unfair at first, but then those plans will help build the nation.” However, Prime Minister Modi did not directly mention the Agni Path project during his speech.