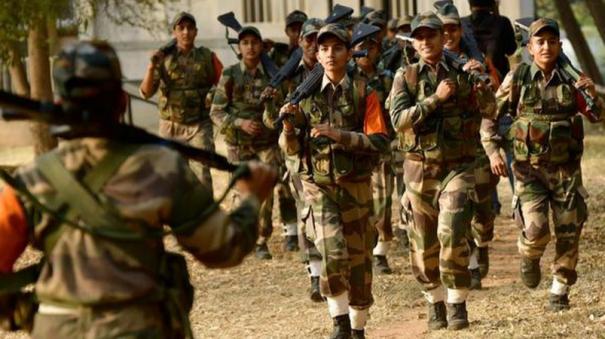 Fighting intensified in most parts of the country in the two days since the announcement of the fire route project, which aims to recruit 46,000 firefighters for the three forces. Before we look at why this is a struggle, let’s look at why the federal government and the three forces came up with this plan.

The federal government has made it clear that the project is being brought in because the three forces want young, vibrant, agile and fast-paced warriors. Today, the average age of India’s troopers is 31. That’s about 25 in various countries around the world. The program will reduce the average age of players from 4 to 5 years. The trio is like a pyramid not only in terms of players but also in terms of age. If the average age of civil servants is 40, it will not endanger the security or integrity of the country. But this does not apply to the three forces.

Also, warfare involves a variety of activities, including cyberwarming. It can easily provide appropriate training to young people in their early 20s to handle modern technologies and deal with cyber warfare. It is difficult to understand for those 15 years older than them. Those who understand the current structure of the three forces around the world and realize that war tactics change from time to time will not question the new plans of the government and the three forces.

Then why are the young people who want to join the Troops afraid about the Fire Path project? Must be between 17.5 and 21 years of age to join the program. The youths, who have been waiting to join the trio for the past 2 years due to the Corona Pandemic, have been accused of being denied the opportunity as they are over 21 years old. As a result, the federal government has raised the age limit to 23 this year alone.

Those who join the three forces are now allowed to serve up to 18 years. After that you can continue if you want. But it has been announced that firefighters will be recruited on a contract basis for only 4 years under the firefighting scheme, after which only 25 per cent of firefighters will be hired on a permanent basis. As a solution to the fear of what will happen next after 4 years, the Central Government has announced a 10 per cent reservation for firefighters in the Central Armed Police Force and Assam Rifles. About 3 lakh soldiers are serving in these 2 forces alone. According to this, all the soldiers who will be released from the three forces after completing 4 years of service will get jobs in these 2 forces. In addition, various state governments have promised to give priority to firefighters in the police force. So there is no famine for firefighters after completing the task force.

Then we have to look at what kind of youth the Agnipathai project did not meet the expectations. After the independence of the country, the administration and government welfare schemes began to expand. Thus began public sector enterprises at the central and state levels. Under Nehru and Indira, many private companies were nationalized. This led to an increase in government employment in the 1960s, 70s and 80s. At the same time, private sector jobs were scarce due to licenses and quotas. Due to this, the main expectation of the youth at that time was government employment. The situation began to change after the 1990s. Government agencies began to contract out non-essential work. Thus, the cost of salaries and pensions was limited.

Employees can be paid for time (Salary for time) The process that began in the early twentieth century has begun to deviate slightly from the beginning of the twenty-first century. In the future, wages are a substitute for time, and the status of a salary for work is about to be fully realized. In the future, technology will continue to change the nature of jobs. In this scenario the norm of the twentieth century that a company may be in the same position until the age of retirement at the age of twenty is breaking in this twenty-first century.

Because of this it is unheard of for any organization to keep employees on the job until retirement. Employees in the private sector can be hired or fired at any time as required. But employees working in government departments have to keep them until they retire. This is why all organizations have to hire employees for short periods of time. Or outsourcing essential tasks to other companies (Outsourcing) with only essential employees as permanent employees. The Indian troop wants to follow the same path as other countries.

The problem is that young people who want to join the Indian Army do not understand the changes that are taking place in the employment system. Most of them are from families who have never had a government job. Those who think that permanent employment in the government is going to be the same as before because they have not seen the job security, social status and life in the same company. Those who had worked in the three forces for 18 years and thought they could pursue another career with a pension. This struggle is the culmination of the frustration of not realizing that time has gone uphill.

The federal government has announced a 10% quota for paramilitary forces. Qualified firefighters must be assured in writing that they will be enlisted in the paramilitary after 4 years of service. The Central Government should take the information to the youth that this is a good opportunity for the firefighters to prepare themselves to join the paramilitary or any other challenging task by serving 4 years in the three forces. After that, the Indian Troops will have to carry out the full-scale firefighting project. The fire route project brought by the central government is the perfect path. The government should not buy back from this.