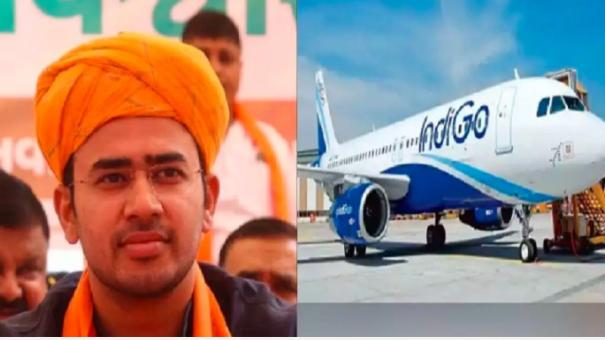 New Delhi: Karnataka BJP MP Tejashwi Surya. He traveled on an Indigo flight from Chennai to Trichy on December 10. Then, he opened the emergency door of the plane.

Subsequently, the engineers immediately took up the work to repair the internal pressure and door of the aircraft. Then the flight left Trichy 2 hours late. IndiGo apologized to the passengers for the incident.

Opposition parties including the Congress criticized that this action of the BJP MP posed a threat to other passengers and what would have happened to the passengers if the door had been opened while the plane was flying.

In this case, after a month, “BJP MP Tejashwi Surya has opened the door of the plane by mistake,” Aviation Minister Jyothir Aditya Scindia said yesterday.

He further said, “In this matter, the passenger had opened the emergency exit on the right side by mistake. The passenger (Tejaswi Surya) also immediately apologized for this coincidence. The key is not to be careless. After this incident, the flight was allowed to take off only after all the checks were completed,” he said.

It is said that Tamil Nadu BJP leader Anna Malai also traveled with Tejaswi in the flight. Is it enough if Tejashwi apologized for playing with the passengers’ lives? It is noteworthy that when the opposition parties have been questioning for the past one month why no serious action was taken against him in this matter, Minister Scindia has now given an explanation.