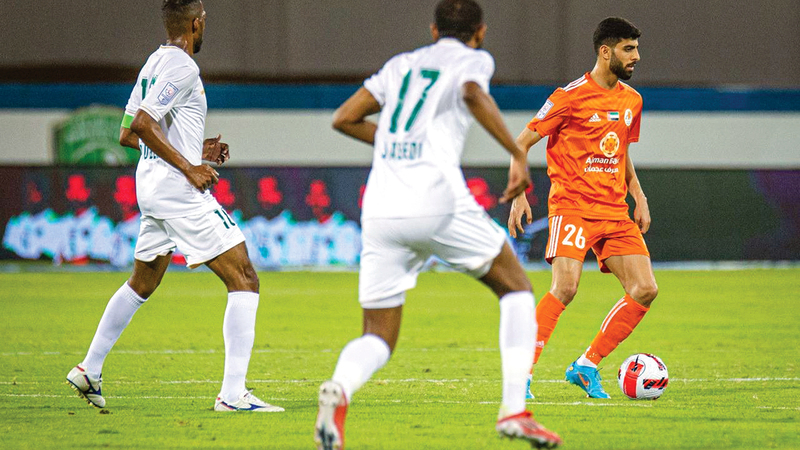 Ajman Club management succeeded in extending the contract of the first football team’s midfield star, Bilal Youssef, for two seasons, without revealing the financial details of the deal. Bilal Youssef joined the ranks of Ajman in the summer of 2021, coming from Fujairah in a free transfer deal, with a contract of only one season. The player revealed that “a word from the Ajman administration was enough for him to decide to continue with the team, which he feels very happy to play for.” Four clubs wanted to obtain the services of Bilal Youssef, during the current summer transfers, but Ajman officials succeeded in retaining the player’s services, After the recommendation of the Serbian technical director Goran.

Bilal Youssef said that he was prioritizing Ajman over the rest of the other offers, and that this facilitated many of the negotiation stages that took place in ease and ease, according to what he confirmed. The player added to “Emirates Today”: “I was committed to continuing with Ajman, after I presented the most wonderful season in my football career, and through (orange) I was honored to join the national team squad in some periods.”

He pointed out: “I will not exaggerate if I say that I did not discuss the offers that I received some time ago, after I received a word from the club’s management of their desire to continue. Or the technical or the masses, and it was not easy to realize all this and go to any other club.”

Bilal Youssef continued, “We have a big project in Ajman, which we are planning in the future, and I loved being part of it, as the club’s ambition is to be among the big five next season, and to compete for the President’s Cup and the Professional League Cup.”

On his assessment of the appearance of Ajman in the last season, he said: “With the testimony of everyone, we presented the best season for “Orange”, in terms of performance or even results, and Ajman deserved to be in the fifth or sixth place, but the results in the last two rounds did not serve us.”

He added, “I imagine that Goran’s stay will contribute to the success of the Ajman project, which the players are motivated by with the management.”

On the needs of Ajman from his point of view for the new season, he explained: “The most important thing that Ajman needs is the quality of foreign players, especially since the team has the quality of citizen players in all centers, but it is certain that the presence of five players at a high level will contribute to achieving the aspirations of the club, especially With the support of the fans.

• Ajman aims to finish the next season among the top five.