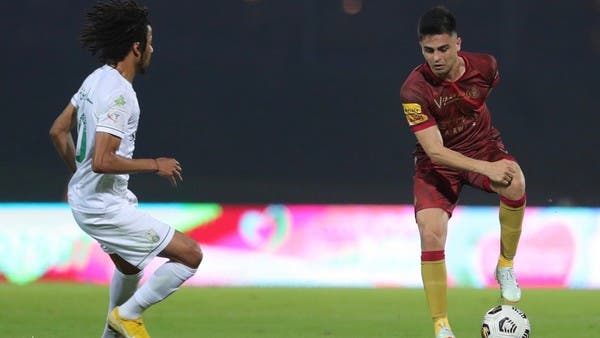 On Friday, attention will turn to Prince Abdullah Al-Faisal Stadium in Jeddah, which will host an exciting meeting between the wounded Al-Ahly and its guest Al-Nasr, at the top of the confrontations of the 13th stage of the Mohammed bin Salman Professional Cup League.

The two teams enter the match in search of compensation for their failure this season, after the negative results they suffered, which kept them away from the top teams.

Al-Ahly, which has once again returned to the cycle of losses, aspires to restore the tone of victories and progress towards competing with the top teams, at least in the last two stages of the first round.

Al-Ahly succeeded in stopping the bad results that required it in the first seven stages, as it began to recover from the eighth stage when it swept the agreement with a clean four, to follow it with a deserved victory over Al-Tai 2-1, and a draw with Al-Hilal 1-1, and Al-Batin won with a clean goal.

In the last stage, Al-Ahly was required to win if it wanted to tighten the screws on the top teams, but it returned to the cycle of losses after it conceded two goals from Abha, to fall to seventh place with 15 points.

Al-Ahly coach, Pensik Hasi, suffered two painful blows, represented by the absence of two players from the Clasico, Croatian Philip Bradric due to the accumulation of cards, and Brazilian defender Dankler due to his expulsion in the last confrontation with Abha.

While the participation of Syrian striker Omar Al-Soma is still in doubt after the injury he sustained during the last match against Abha.

On the other hand, Al-Nasr enters the match with problems at all levels, as the team suffered from technical instability in addition to administrative problems.

The Nasrawis hope that their return to victories will be from the big gate through the Clasico meeting, after the team’s negative results in the past four stages.

Al-Nasr has spent more than 50 days since its last victory in the league, which was at the expense of its host Abha 3-1 in the seventh stage.

Al-Nasr has not known the taste of victory since its Asian exit at the hands of its traditional rival Al-Hilal in the semi-finals of the competition, where it lost two matches against Al-Ittifaq and Al-Shabab and tied against Al-Fayhaa and Al-Raed.

The Brazilian coach, Marcelo, the interim coach of Al-Nassr, is looking forward to his team returning to victory over Al-Ahly and keeping its chances of competing for the top spot, especially as he has two postponed matches against Al-Taie and Al-Hilal, which he will play next December.

The problems of victory did not stop there, but he will also miss the Moroccan confrontation, Abdel Razzaq Hamdallah, the team’s historical scorer in the professional league due to the termination of his contract.

Al-Nasr administration decided at midnight on Tuesday to terminate the contractual relationship with Moroccan striker Abdel Razzaq Hamdallah due to a legitimate legal reason, according to its official statement.

Brazilian coach Marcelo Al-Nasr was unable to rely on the Uzbek duo Jalaluddin Masharipov and Abdel Fattah Asiri due to injury.

Al-Nasr coach will rely on his Cameroonian striker, Vincent Abu Bakr, and next to him, the Brazilian Talisca, to lead the team’s attack after the termination of Hamdallah’s contract.

Al-Nasr enters the match while it is in the ninth place with 14 points, 10 points behind the leaders Damak, with two matches that are postponed.