Al-Ahly Jeddah faces the risk of relegation.. Al-Faisaly and Al-Batin are moving away 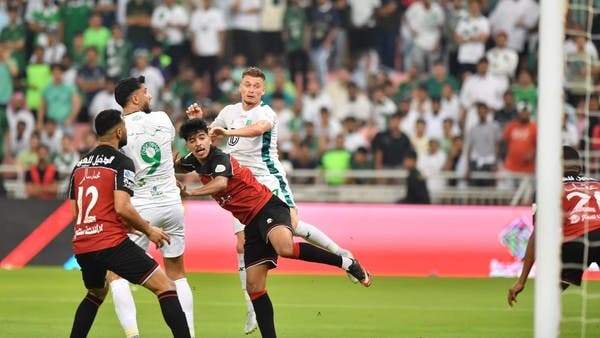 Al-Ahly’s position worsened sharply in its struggle to escape the specter of relegation to the lower league, after its painful loss 1-3 against its leading guest, today, Thursday, in the twenty-ninth stage of the Mohammed bin Salman Professional Cup, while Al-Batin fled from the danger zones after its victory over Damak 2- 1, Al-Faisaly beat Al-Tai with a goal.

Aqil Balghith advanced in the interest of Al-Raed in the 43rd minute, before Raed Al-Ghamdi and Karim Al-Barkawi added the second and third goals in the 60th and 83rd minutes, respectively, while Carlos Eduardo scored Al-Ahly’s only goal in the fifth minute of the second half.

Al-Ahly became required to beat its Al-Shabab host in its meeting in the last round of the competition this season, in order to avoid relegation, hoping that the results of its competitors in the same round would benefit him, but his relegation would be confirmed officially if he failed to beat his opponent, without looking at the rest of the other results.

Al-Ahly’s balance froze at 31 points in the fourteenth place, one point behind the safety centers, while Al-Raed’s balance rose to 34 points, to get out of the relegation centers, after advancing to the eleventh place.

Al-Batin turned its back to a 2-1 victory over its Al-Batin counterpart, raising its score to 32 points in 13th place, one point ahead of the relegation centers.

Al-Hazm, whose relegation was officially confirmed, lost four goals to one from Al-Nasr, to remain in the last place with 17 points, and Al-Nasr strengthens its third position with 58 points.

After confirming the relegation of Al-Hazm (the bottom of the standings) to the first class, there are still two seats left in the first division, waiting for the final stage to be decided.