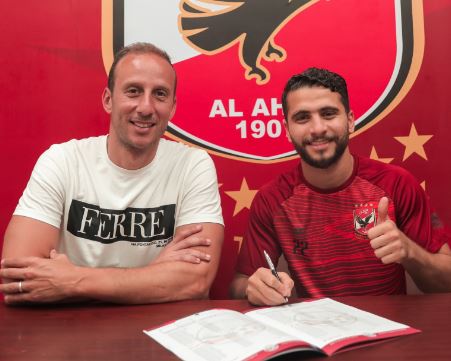 Amir Tawfik, Director of Contracts at Al-Ahly Club of Egypt, announced the extension of the contract of Mohamed Mahmoud, the first football team player, for a period of 4 seasons. Amir Tawfiq said in statements to the club’s official website today that Mahmoud’s contract has been extended for 4 seasons, other than the next season remaining from his current contract, so that the player’s contract with Al-Ahly will become 5 years to come.

He added: “Mohamed Mahmoud’s signature came in blank with a desire and a personal request from him, in appreciation of the club’s position with him, who supported him throughout his injury period, which lasted nearly two whole years, and Mohamed Mahmoud felt that the club’s support for him deserved to take the initiative to appreciate and extend his contract without any financial conditions. Absolutely, which is what happened.”

He explained, “The player refused to talk about any financial aspects, leaving the financial assessment to the club’s management, which believes that the player’s position deserves salutations and praise.” Tawfiq also announced the transfer of Senegalese Aliou Badji to the ranks of the French club Amiens for the final. Tawfiq said that Amiens activated the player’s purchase clause in the loan contract that Badji spent at the French club for a year.
He added, “Al-Ahly received the desire of the French club in official offices several days ago, and all the administrative and financial procedures for Badji’s transfer to his new club have been completed.” Amir Tawfiq thanked the Senegalese player for his time with Al-Ahly, as well as during his loan last season.