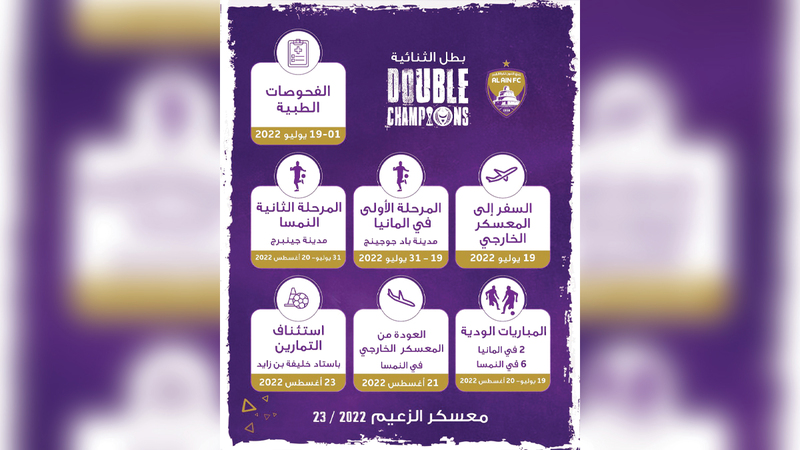 Al Ain Football Club announced the start of preparations for the new football season 2022/2023, starting tomorrow, Friday, with medical examinations for the players, in a hospital in Al Ain, and will continue until July 19, the date of travel to the German city of Bad Gouge, which is witnessing the first phase of the camp. The club will play two friendlies until July 31, during which time the team will play two friendly matches.

And the club’s official account on Twitter stated yesterday that the second stage will start on July 31 in the Austrian city of Geinberg, with six friendly matches, and that the external camp will conclude on the 21st of the same month, which is the date of returning to the country, as the team will receive a one-day rest. Preparations will resume on August 23 at Khalifa bin Zayed Stadium.

It is noteworthy that the club’s management had initiated its contacts with a number of Saudi clubs that are holding their summer camps in Europe, in order to arrange a friendly confrontation during the camp, at a time when the fate of the Argentine substitute Christian Guanca is still unclear, as the administration is looking for a contract with a foreign player in the playmaker position. To compensate Guanca, who returned to the Saudi youth club after the end of his loan.