Al-Ain coach: I am not interested in the winter title, and I do not think about numbers 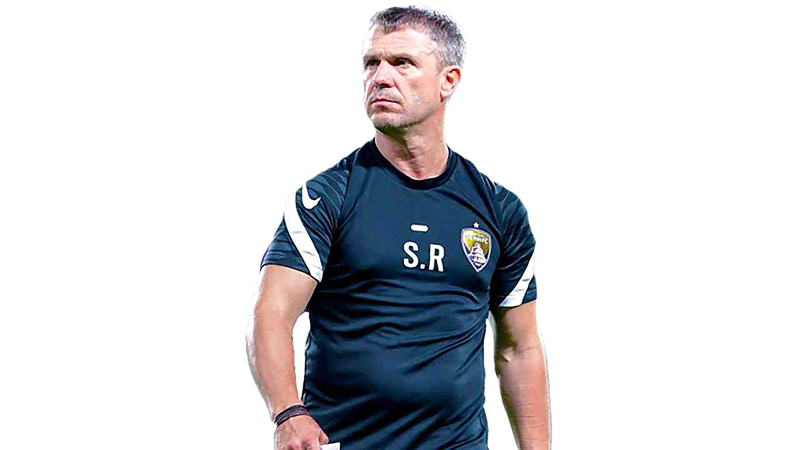 Al-Ain Ukrainian team coach Sergey Rebrov stressed that he deals with the ADNOC Professional League on a practical principle by focusing on each match separately throughout the season, away from accounts and labels, especially after the team secured the title of “Winter Champion” two rounds before the end of the first round, noting that Players enter each match as a championship, and then look at the outcome at the end of the season, in which he hopes his team crowned the title of the competition, as he put it.

Rebrov, who is spending his first year with the team and has so far succeeded in recreating the “leader” character, told “Emirates Today”: “I look at all the matches of the season as important, focusing in them and providing a convincing performance is the important goal for me, and I am not interested in the winter title, nor I think of numbers.

Al-Ain, which beat Al-Nasr, last Saturday, needed to beat Ajman next Thursday in the next 12th round to win the title of “Winter Champion”, but the loss of its pursuit of Al-Wehda against the Kalba Union accelerated this, after the “leader” balance became 27 points, superior to Al-Wahda “runner-up”. » By seven points. The “leader” had previously tasted the sweetness of the “Winter Championship” and won the title at the end of the season, and that was in the 2011-2012, 2012-2013 and 2014-2015 seasons. He also achieved the title of “Winter Champion” in the 2017-2018 season after he finished The first round was behind the Al-Wasl team, but he returned and later won the title. For his part, Al-Ain team supervisor Abdullah Ali said in press statements that the two victories over Al-Nasr were important, especially since the “leader” was subjected to a great challenge in them due to injury, and that striker Laba Kudjo had joined the list. The injured in the “Al-Ameed” meeting in the league, but their team was able to confirm that he was the one who attended.

He added, “We have a group of players, not just 11 players. It is important that you have a bench of 18 to 19 players who are fully prepared. In general, the team awaits confrontations in the three competitions in which it participates.”

Al-Ain scored 27 points in the league, seven points ahead of Al-Wahda “Al-Wasif”.