Al-Ain is close to clinching the league title .. “The Secret” inside the penalty area 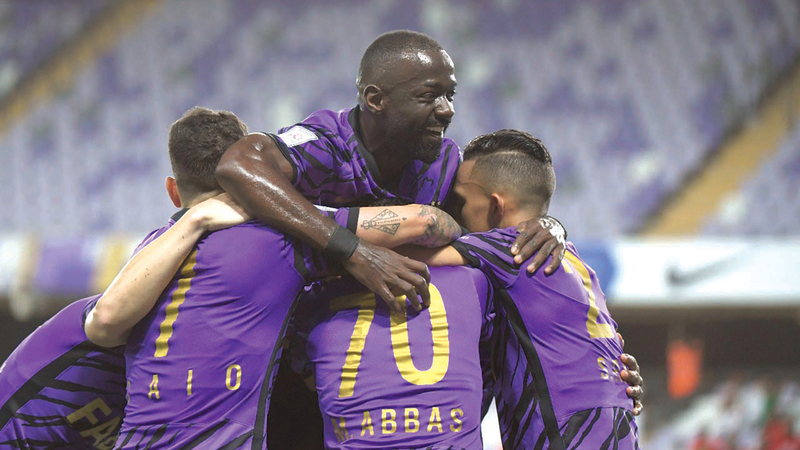 Al-Ain team is close to a new and big step from crowning the ADNOC Professional League title for the current season, after it managed to beat Shabab Al-Ahly in the Clasico Summit in Round 21 yesterday, 1-0. With this victory, Al-Ain confirms its strength this season, as the fear was the team’s loss due to its long absence from official matches, unlike Al-Ahly youth, who came from Asian qualification and strong matches.

Al-Ain proved its worth after important victories over Al-Wahda, Al-Wasl and Shabab Al-Ahly, which confirms Al-Ain’s eligibility for the league title, as it achieves victory over its direct competitors and even non-competitors. Al-Ain relied on winning the Togolese League top scorer Laba Kodjo, who scored the only winning goal in the match with a great technical effort, also from inside the penalty area. This area is one of the secrets of Al Ain’s victories this season, as he excelled from inside the penalty area after scoring 44 out of 45 goals. On the other hand, Al-Ahly youth did not succeed in stopping the series of successive defeats, to suffer the fifth loss in a row, which is the worst results provided by the team since the 2005-2006 season.

On the other hand, Al Wahda maintained the runner-up position by winning over Al Dhafra and moving away by three points from its closest competitors, Al Jazira and Sharjah.

Sharjah’s great victory over Al-Orouba by five showed the great difference between the two teams technically and tactically, while Al-Orouba may be raising the white flag next to the Emirates team, at the bottom of the standings.

The struggle in the middle of the standings table continues between five teams separated by four points, and the surprise is that Al-Ahly’s youth joined the fifth (30 points) in the middle teams after it was a strong contender for the title.

As for the relegation struggle, it may be resolved by 95%, as the Al-Orouba and Emirates teams are strong candidates for relegation, after remaining at the bottom of the standings table since the beginning of the tournament with nine and 10 points, respectively.

“Emirates Today” monitored a question via (Twitter) about the reason for the appearance of Al-Ahly youth at a modest level this season, and the exposure to five consecutive defeats, in which it said: “We shared the opinion … what caused the deterioration of the results of Al-Ahly youth in the ADNOC Professional League and receiving the fifth loss in a row. Despite his brilliance and his rise in the AFC Champions League?”, four answers were monitored, namely defensive problems, foreign players, instability of the formation, absences and injuries. During the voting in which 119 participants participated, 48.7% confirmed that the reason was the instability of the formation, and 21.2% chose absences and injuries, foreign players 19.5%, and defensive problems 10.6%.

Technical analyst Khaled Obaid confirmed that Al-Ain team is entitled to the league title, after the important victory over Al-Ahly youth in round 21, to confirm that it is the best this season, while Al-Ahly youth team needs intervention, whether at the level of foreign players or the defense line, in addition to the unstable formation. From one match to the next.

Khaled Obaid told “Emirates Al-Youm”: “The results of Round 21 are logical. Al Ain came close to winning the league title, and showed Sharjah’s desire to modify the path, and the continuation of the victory crisis this season with a tie against Kalba, and the relegation I had previously confirmed that the Emirates and Al-Uruba teams officially landed from My opinion is after the disappointing results of the two teams in the tournament.”

To see the full thread, Please click on this link.