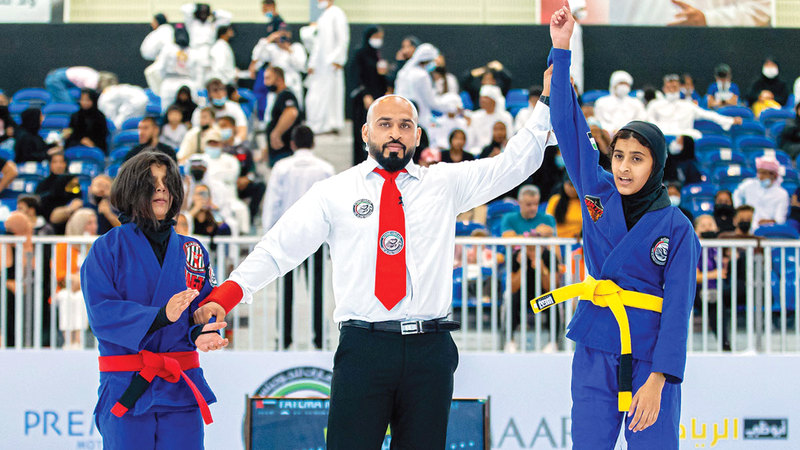 Yesterday, the Jiu-Jitsu Challenge Championship, which was held over two days at the Emirates University in Al Ain, was concluded with a large crowd.

At the end of the second day of the championship, Al Ain Club won the first place with 1760 points, and the Sharjah martial sports players came in the runner-up position with 1724 points, to be the third place for Palms Sports Academy with 1493 points. In terms of country rankings, the UAE came first with 5131 points, Brazil came second with 659 points, and Jordan came third with 530 points.

Commenting on the tournament, Yousef Al-Batran said: “The Challenge Jiu-Jitsu Championship continues to achieve its goals of attracting greater participation for the younger age groups, and consolidates its position within the Federation’s plans to discover talent and create champions who are able to compete globally.” He continued, “The Challenge Championship came out distinct through the strong levels presented by the players, despite their recent era in the game, and the performance of some talents in the fights won the admiration of the members of the technical staff of the national team, who constantly seek to strengthen its ranks with the most distinguished players, and the event contributed In providing multiple options for coaches, which is one of the most important gains in the tournament.”

Al-Batran added: “The great role played by the family, which is a key partner of the Federation in implementing its annual plans and agenda, must be commended, as it enjoys a great awareness of the role of jiu-jitsu in refining the talent of children.”