Al-Ain renews the victory over Al-Nasr .. The password is “Guanca” 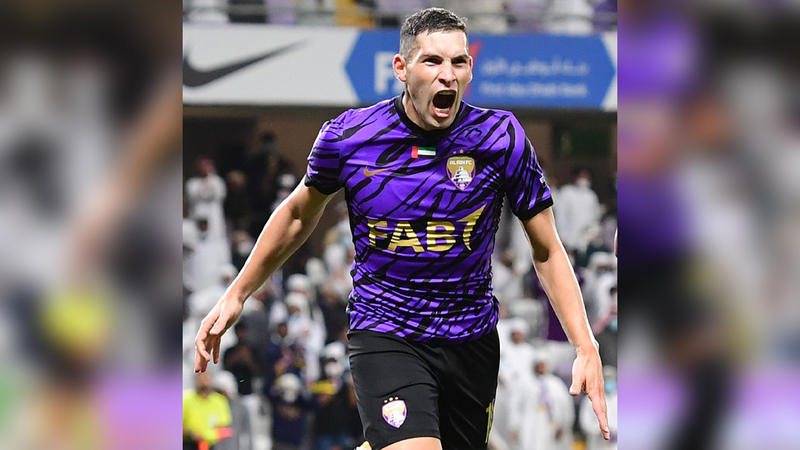 Al-Ain midfielder Cristian Guanka played the role of his fellow Togolese striker, Laba Kodjo, who was absent from the squad, due to injury, and led Al-Zaeem to achieve an important victory over his guest Al-Nasr 3-1 in the confrontation that brought the two teams together yesterday evening at Hazaa Stadium. Bin Zayed, in the 11th round of the ADNOC Football League, to come close to securing the title of “Winter Champion”, in the event of Al-Wahda losing against Kalba, today, after raising his score to 27 points, singing in the lead, while the “Brigadier” points froze at 17.

The confrontation was very exciting and friendly between the two teams, especially as it was a repetitive scenario between the two teams after the President’s Cup meeting, which was held only five days ago, and ended with the victory of “Violet” 1-0, and qualifying for the quarter-finals of the competition. The match witnessed the expulsion of Al-Nasr player Mahdi Obeid with a red card after a rough intervention against Al-Ain player Sufian Rahimi.

The crossbar prevented Al-Nasr from scoring early, specifically in the tenth minute, when it blocked the shot of striker Sebastian Tigali, and the scene was repeated again in the 30th minute, when Al-Nasr player Abdulaziz Al-Kaabi hit a strong ball that hit the body of Al-Ain player Jonathan, before hitting the crossbar and turning into a corner kick.

The excitement of the confrontation increased after Al Ain scored a penalty kick in the 40th minute of the match, but Moroccan Sofiane Rahimi missed it.

Contrary to the course of the first half, Al Ain scored the goal, scoring the lead through Guanca from a penalty kick in the 46th minute, while Al Nasr equalized through Tigali in the 65th minute.

The excitement did not stop there, as Guanka returned and put Al-Ain in the lead by scoring the second goal for him and his team in the 71st minute, while midfielder Ahmed Berman secured the result with the third goal in the 81st minute. Tigali scored the 170th goal in the match in the history of his participation in the league, becoming the fifth The best scorer in the history of the league.

• Tigali became the fifth best scorer in the history of the league with 170 goals.