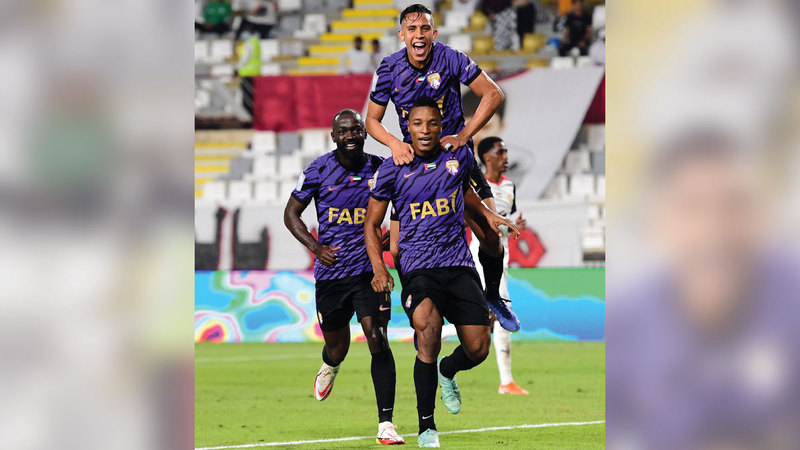 Al-Ain turned its goal back into a big victory over Al-Jazira by five goals to one, yesterday, in the tenth round of the ADNOC Professional League, at Al Nahyan Stadium in Al Wahda Club in Abu Dhabi, so that the “leader” raised his score to 24 points at the top of the standings, while his score stopped “. Pride of Abu Dhabi” at 16 points.

The two teams made a quick match, and in the 12th minute, Serbian Milos Kosanovic scored the first goal for “the pride of Abu Dhabi” after Abdullah Ramadan played a perfect cross from a corner kick, and Kosanovic headed into the goal. A cross headed by Khaled Al-Balushi and Al-Amiri tackled it brilliantly (18).

The visiting team continued its advantage, and Sofiane Rahimi played a beautiful ball to Argentine Guanka, who hit the ball directly in the goal, scoring the first goal for Al Ain (24), and in the 30th minute, Italian referee Daniele Doveri awarded a penalty kick after the Togolese Laba Kodjo was fouled by Al Jazira goalkeeper, and Kodjo kicked the ball skillfully in the goal, scoring the second goal (32), while Al-Jazira was active in the last five minutes of the first half and the crossbar countered a dangerous ball from the Brazilian Bruno de Oliveira (40), before Sufian Rahimi added the third goal of a counterattack that the Moroccan player skillfully ended in the goal ( 45).

In the second half, Laba Kodjo added the fourth goal after Abdul Rahman Al-Amiri made a mistake and the ball fell from his hand and the Al-Ain striker completed it in the goal (51).

Despite the numerical shortage, Al-Jazira played in an offensive manner and Ali Mabkhout almost scored the second goal from complete isolation, but Khaled Issa saved the ball brilliantly (72), while Al-Ain dominated the midfield and Laba Kudjo completed the hat-trick by scoring the fifth goal in the second minute of overtime to end. The match is a big win for the eye.